How Is Killing Coexisting? 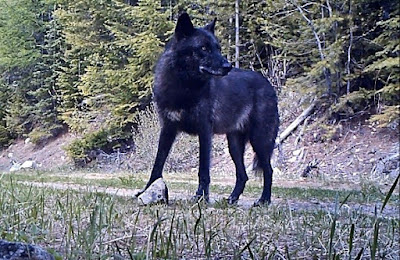 Four more members of the Old Profanity Territory pack were gunned down on August 16 by Washington Dept. of Fish and Wildlife (WDFW) shooters. Their deaths came just hours before a judge put the kill order on hold, ruling a trial necessary to determine if Diamond M Ranch met the requirement for using non-lethal deterrents before wolves were targeted. I applaud the judge but feel sad for the waste of wolves.

It’s easy to spew anger at the one rancher behind these wolf losses. His inability or unwillingness to coexist, to use effective non-lethal deterrents, has cost the lives of many cattle and now 26 wolves on his public lands grazing allotments. The rancher is reimbursed for the loss of cattle, gets some of his investment back. No one can bring back the wolves killed on our public land, the only home available to them.

But if we’re going to coexist with wolves, a species that has roamed this country far longer than we have, we have to look beyond anger. And we don’t have to look far to question the motivation and actions of WDFW. It seems obvious that killing wolves on the same grazing allotment over a seven-year period would make the agency doubt the effectiveness of their approach, admit the area is wolf habitat not cattle pasture, and move the cattle. Instead WDFW keeps shooting, claiming they are just following orders, the prescribed Wolf-Livestock Interaction Protocol.

I’ve read their current protocol and found abundant mentions of killing wolves as a way to end conflict. I found a few mentions of coexisting. I found NO mention of moving cattle away from an allotment proven unsuitable for grazing. Why is killing the primary tool for coexisting? Killing wolves ends their existence; it doesn’t promote coexistence.

Once we favor moving cattle instead of killing wolves, we have to look beyond WDFW and question the US Forest Service, the federal agency that issued the permit for the troubled allotment. What more would it take for the Forest Service to accept that Diamond M’s allotment is inappropriate and indefensible and the cattle should be removed? That’s such an obvious solution—if you value the lives of wolves trying to survive on public land.

It’s time to practice coexistence. It’s time to stop killing wolves and to start moving cattle. It’s time for the Forest Service and WDFW to work together to stop grazing on public land allotments that are good wolf habitat and bad cattle pasture.

And this simple approach does not just apply to Washington—though right now that state is a shining example of the dark side of wolf “management.” This practical approach to coexistence should apply in all states that have cattle, wolves, and conflict on public lands.

Posted by Rick Lamplugh at 6:50 AM