"I Write As If Nobody Is Going to Read It", An Interview with Rick Lamplugh 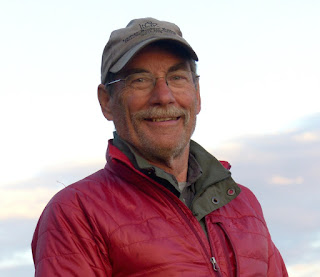 Note: Torsten Schäfer, the interviewer, is a German journalist and blogger at Gruner-Journalismus. The interview was published in German, but Torsten was kind enough to provide an English translation.

Torsten Schäfer: Let’s start with nature writing itself; to me it means non fiction writing about nature with a poetic perspective. In my personal opinion there is also much description and it’s also much about fact and knowledge and this is the part where journalism comes in. The third perspective is as far as I define it, is essays. Nature writing is also about reflection of society and politics. So nature writing is poetry, essays and description.

Rick Lamplugh: And you are saying that in Germany today, this is new—nature writing is becoming just now part of the literary scene in Germany?

Torsten: Yes, as a concept. We even use the English term nature writing because we don’t have one of our own. But when it comes to nature writing, how do you combine in your writing the ecological context, the background, the details, and the poetic perspective?

Rick: I’m not a scientist, I’m a writer. But I have a deep respect for science. And I want to make sure that I get the science right—as I understand it. And that was one of the reasons that my first book about Yellowstone In the Temple of Wolves was approved by the National Park Service to be sold in the national parks. I got the science right. And that really made me feel good.

Science is only one part of my writing. Because what I really want to do is make the science understandable to the average person. And here’s how I try to do that. First I want to bring the reader into the book. If I am out snowshoeing or cross-country skiing I want the reader to start sweating and feeling the cold and wondering how are they going to get across that snow field. I want to draw them in that much. Once I have the reader with me, then I can start to bring in the science. So maybe I am skiing across a plateau and there is a herd of bison in front of me. I can start telling the reader about how difficult it is for a bison to survive the winter.

Torsten: Would you call yourself a science writer or a nature writer?

Torsten: How did you start writing?

Rick: I wrote my first book in the late 80s. That book and the next were about my career field and not nature writing at all. Those two books led to my producing and hosting a Public Radio series. That involved writing to deadline on a weekly basis, and that was good training. In 2008 I wrote an unpublished memoir that combines nature writing with exploring aging and spirituality. In 2012 I published In the Temple of Wolves. In June of 2017 I published my second book about Yellowstone, Deep into Yellowstone.

Torsten: Do you have any key beliefs about writing?

Rick: One of my key beliefs about writing, is that I write as if nobody is ever going to read it. Because that’s true, millions of people will never read what I write. But when I write as if nobody is going to read it, I can be truly honest. I am not writing for an editor. I am not writing for any particular group. I am not thinking: oh well how will my colleagues in Yellowstone National Park feel about this? I am writing to be honest. That means honest description of what I see, honest description of my feelings about what I see. And I think that’s what made In the Temple of Wolves a best seller because people really met me as a person.

Torsten: How did you end up in Yellowstone’s Lamar Valley?

When we returned home, I took my journal entries and my photographs and made a small book just for friends and family. I called it In the Temple of Wolves. I got great feedback So I decided that I would publish this as a book for a wider audience. When we went back to the Lamar Valley for a second winter, I did the research that went with the previous year’s journalling. I added the scientific information that filled the book out. When we went back for the third winter I started promoting and selling the book. So I didn’t go to the Lamar Valley to write a book. I went there just as a person who loves Yellowstone and I think that what comes through in the book. My love for Yellowstone and that’s why people like that book so much.

Torsten: Have you writers that have inspired you?

Rick: Well yes. Edward Abbey, for one. He wrote mostly about the American southwest. He’s very opinionated. You can’t read an Edward Abbey piece or a book without knowing who this guy is. And for me that’s a really important part of nature writing. It’s important to know who the writer is, to know their feelings. That’s how I differ nature writing from journalism. Because in journalism you may not know the writer, you may like their style, you may feel comfortable with their word usage but you don’t really know what they are thinking or feeling. In nature writing I think it’s important—for me anyway—that the reader know exactly what I am thinking and feeling. Edward Abbey is like that. John Krakauer and Sebastian Junger are like that. Another writer, Gary Ferguson, also inspires me. Especially his book Hawks Rest.

Torsten: I am in contact with a publishing house about a book that I would like to write about people living close to lakes and rivers in Germany. I think we have lost contact with the rivers and lakes that used to be in the center of society for centuries and now are somehow separated from us. But it is very difficult to show everything that I feel—what I see is fine—but that’s the journalist in me who is the obstacle for this. That’s clear.

Rick: Well, some writers show more of themselves than others. Recently I published my newest book, Deep into Yellowstone.The subtitle is “A Year’s Immersion in Grandeur and Controversy.” My wife and I moved to Gardiner Montana a little over two years ago. We live right at the north gate of Yellowstone. What I didn’t realize until moving there is that Gardiner is the center of a number of controversies like the delisting of the grizzly bear, like hunting wolves when they step foot outside the park, like whether wolves harm or help the local economy. The overuse of the park and the slaughter of bison are other controversies.

Once we moved to Gardiner I got involved with protesting against the delisting of the grizzly. I have written extensively about the slaughter of the bison. I am part of an all volunteer conservation group here in Gardiner and we have helped to reduce to number of wolves that can be killed once they step outside of the park. While doing that I wrote articles for a website called yellowstonereports.com. My arrangement with the publisher of that website was that they would have exclusive on these pieces for 90 days but the articles would eventually become the basis for a book. So the writing process was writing articles of 1,000 to 1,500 words and then putting them all together into a book. Sometimes I lengthened the pieces, putting in information not on the website, or added more science. Then I put them in chronological order, to tell a story from January through December.

Torsten: What are your next projects?

Rick: I will continue to write to protect wildlife and preserve wild lands. I’m writing about how in the United States there is a big move to weaken our endangered species act. I’ve gone to Washington D.C. to speak to senators and representatives and encourage them to keep the endangered species act strong. I will write once again this winter about bison hunt and the capture and slaughter of bison. I’ll write again about the killing of wolves because that doesn’t stop here in Montana — doesn’t stop anywhere in the Unites States. And I’m sure there’s another book coming up

Torsten: How much is nature writing linked with journalism in the U.S.? Do they enrich each other?

Torsten: Exactly. I will have a whole special with nature writing with different authors and it should be a package to somehow introduce nature writing to german journalism.

Rick: Well I’m really happy that you are doing that. I would like to go back to wolves for just a moment. Wolves, as you have mentioned before, are a symbol, of wildness. But I think what’s important for people to understand is that wolves don’t need wilderness to survive. What wolves need, are for people to coexist with them. We have to change our behavior. We can’t expect a wolf to change its behavior. Wolves mate and hunt and raise pups and spread to new areas. But we as humans have the capability to do so much more for good and for bad. And I think what we need is for that massage to get out to people in the United States and in Germany. We have to learn to live with the wolves, the wolves don’t have to learn to live with us.

Torsten: How should we cope with people who don’t want to live with wildlife?

Rick: I’ve been advocating for wolves for six years and what I have learned is that if somebody hates wolves I am not going to be able to change that opinion. If somebody loves wolves, that’s great. But there is a whole group of people in the middle—what politicians call “the swing voters.” Those are the people I want to reach.

My goal is to move these swing voters towards a respect for wolves. They don’t need to love the animal. I don’t want them to think of wolves as pets or wolves as dogs that live in the wild. Wolves are wild animals that make tough decisions to survive. That’s what they do. And we have to learn how to coexist with that animal as we continue to invade wolf territory.

Torsten: Thank you for your time. 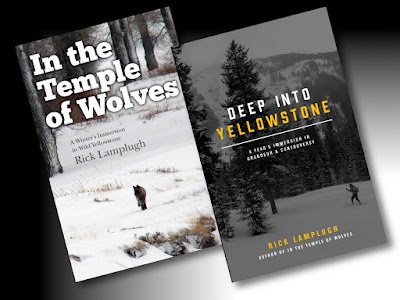 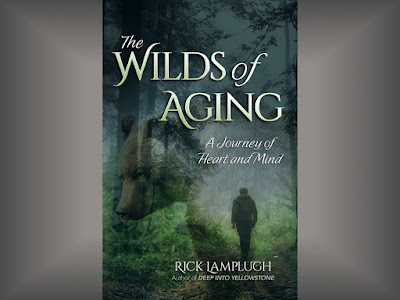 Rick's new book, The Wilds of Aging, is available signed or on Amazon.
Posted by Rick Lamplugh at 4:42 PM