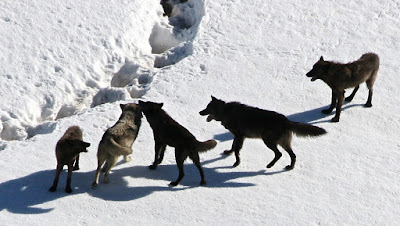 During the last Ice Age, reindeer abounded in northern Eurasia. Those reindeer sustained such a huge population of wolves that wolves in Eurasia outnumbered humans by almost twenty to one, according to Wolfgang Schleidt and Michael Shalter. While some experts have described Ice Age humans as powerful predators able to bring down whatever they needed, Schleidt and Shalter paint a different picture in their peer-reviewed journal article, From Dogs and Mankind: Coevolution on the Move—An Update. “A more probable depiction of [early humans] during the second half of the last ice age is that of small bands of foragers who supplemented a mainly vegetarian diet with small game and leftover megafauna carcasses…”

Humans would have had abundant wolves to thank for many carcasses.

During the Ice Age, wolves, say the two scientists, acted as they do today. “Far from being bloodthirsty beasts killing for killing’s sake, wolves are apparently very careful observers of their potential prey, attacking mostly what they can get without much risk to themselves—the young, the old, and the infirm—behaviors that have led some observers to compare them with pastoralists, caring for their herds…”

Schleidt and Shalter speculate that once those paths crossed, humans may have apprenticed with and learned from wolves about how to care for herds of prey. Wolves and humans could have formed “mixed packs.” While working with humans to take prey may have made life easier for wolves, cooperating with wolves may have been essential for the survival of the small human population of the Ice Age.

Until recently the Ice Age was depicted as a time when “the globe froze over.” But Schleidt and Shalter have studied new climate data and conclude that the Ice Age climate in northern Eurasia was not always icy and cold and unsupportive of life-sustaining flora and fauna. Instead, it alternated between plentiful times during the growing season and lean times the rest of the year.

The scientists state that while the ice-covered lands in the northern Eurasia were unsuitable for megafauna, the lands to the south, lands of tundra not ice, were suitable. Temperatures were cooler, and the climate was dryer because much of Earth’s water was locked up in ice. But “in the tundra’s southern parts during summer months the sun shone high above the megafauna and supported a nutritious vegetation, comparable to the lush meadows of our alpine high pastures and summer resorts.”

These lush Ice Age meadows nourished reindeer as well as woolly mammoths, woolly rhinos, bison, and horses. Given variations in climate and seasons, these grazers migrated. Hungry wolves and humans would have had to pursue them, each taking their share of prey or carcasses.

It wasn’t until the Ice Age ended that humans became the top predator. The bloody climb to the top started once we developed weapons, such as the atlatl and the bow and arrow, with which we could kill at a greater distance and with less risk. Schleidt and Shalter conclude that this ability to kill at minimal risk “ended the balance between predator and prey and turned man the hunter into the ‘natural disaster’ of our times.”

I believe that as our human population swelled and we needed evermore prey, our relationship with the wolf slipped from cooperative to competitive. Instead of coexisting, we began to kill wolves. More than 10,000 years later, we still haven’t stopped.

To read the entire journal article

Photo by NPS
Posted by Rick Lamplugh at 9:02 AM