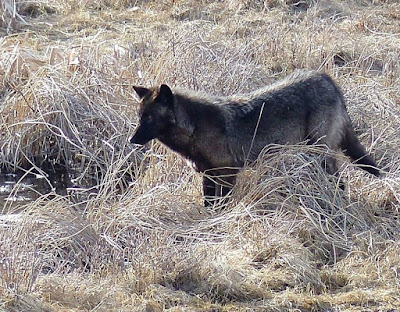 The recent kill order of wolves in Washington highlights a sad fact: grazing cattle on public lands is lethal for wolves. Washington has 1.1 million cattle and more than a third of the state is public land that many of these cattle run roughshod over. Those public lands are by necessity the home of Washington’s minuscule population of around 126 wolves. With so many cattle invading wolf territory, conflict happens.

One ranch is at the core of Washington’s conflict. The Diamond M Ranch’s public land livestock operations have resulted in the killing of 20 wolves including the Wedge Pack in 2012, the Profanity Peak Pack in 2016, the Sherman Pack in 2017, as well as wolves removed from the Sherman and Togo Packs in 2018, and now the Old Profanity Territory Pack in 2019, according to The Lands Council. The constants in this deadly controversy are the Diamond M Ranch, the public lands upon which the ranch has the privilege to graze cattle, and Washington’s Wolf Management Plan.

That plan’s basic premise—wolves are the problem and must pay the price for cattle-wolf conflict—is flawed. Of course, Washington is not unique; wolf management plans in other states use the same flawed premise.

Washington and other wolf states need a Cattle Management Plan. Here’s the premise of the plan I propose and have previously written about. Killing wolves on public land is not acceptable; wolves have nowhere else to live. Instead, the livestock owner bears the burden for reducing conflict his animals cause while grazing on public land in wolf territory. If the owner is not willing to accept this premise and coexist with wolves, the owner should not be allowed to graze livestock on public land.

If the owner accepts this premise and his cattle create conflict with wolves on public land, the owner would have several chances to remedy the situation.

With the first cattle-wolf conflict on public land, the state’s Department of Fish and Wildlife would determine the non-lethal steps the owner must take to keep livestock away from wolves. This analysis and compliance would happen quickly, let’s say within fourteen days. No wolves would be killed during this time.

With the second conflict, the owner’s herd would have to be moved away from the wolves they infringed upon. Let’s say a move of at least thirty miles within seven days. No wolves would be killed during this time.

With the third conflict, the owner’s privilege of grazing livestock on public land would be suspended for two years or more. All the livestock would be removed immediately, and no wolves would be killed.

A Cattle Management Plan such as this should be enforced in Washington and every other state where cattle conflict with wolves on public land. This plan puts the responsibility for reducing conflict on the shoulders of the owners that benefit from the cost savings of grazing millions of cattle on public lands in wolf territory. This plan would save the lives of cattle and reduce compensation payouts by the state. This plan would also save the lives of many wolves that are simply trying to survive on public lands—the only home left to them.