The Troubled Wolves of Isle Royale 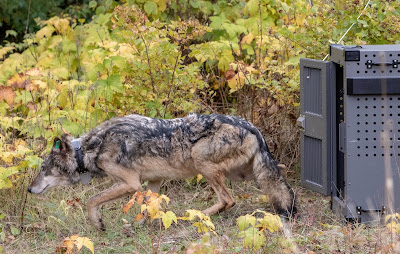 Isle Royale is a small, remote island in Michigan’s Lake Superior and part of Isle Royale National Park. According to the US Census Bureau, the island has no permanent human population. But as of this May, 14 wolves call it home. Twelve were recently transported there; two are survivors of the island’s original population.

The wolves’ main meal, moose, have lived on the island since they naturally migrated there in the early 1900s and found a lot of food. Wolves, of their own accord, first walked to the island from the mainland—across 15 miles of frozen lake—in 1948, and they too found food: moose. Scientists began studying the interaction of wolves and moose in 1958. This longest predator-prey study in the world provides a lot of evidence of the importance of wolves to the ecology of the island.

While wolves have served as effective predators for decades, human-caused warming temperatures have compromised their only route to and from the island. Historically, ice bridges formed on Lake Superior and connected the island to the mainland for more than 50 days a year, according to the National Parks Conservation Association (NPCA). This gave wolves the time and a way to reach the island. But over the last 20 warmer years, these bridges have been far less common. That shut the door to new wolves, stranded the island’s wolf population, and led to inbreeding, which resulted in rib and spinal deformities. Scientists say that inbred populations don’t produce viable offspring and this leads to collapse.

Maintaining enough wolves to hunt moose is essential—but difficult. The wolf population peaked at 50 in 1980 and crashed to 14 just two years later. The crash, according to the National Park Service (NPS), was caused by canine parvovirus, which came to the island via a dog. (Dogs, except service dogs, are no longer allowed on the island.) The wolf population recovered somewhat and then fell to its 2018 low of only two wolves, both related.

With so few wolves, NPCA warns, the nearly 1,500 moose at Isle Royale could double in population over the next several years and devastate the island’s vegetation.

After extensive environmental analysis and input from scientists and the public, NPS released its Isle Royale wolf management plan. The plan was signed by then NPS Midwest Regional Director Cam Sholly. He is now the superintendent at Yellowstone National Park. The plan calls for the reintroduction of 20-30 wolves over a three-to-five-year period, beginning in 2018. The long-term average of the number of wolves on the island is 22.

But relocating wolves to Isle Royale may only be a stopgap solution, according to a recent study. Researchers found that genetic rescue—introducing new genes to increase a population’s genetic diversity—can reduce inbreeding. But Rolf Peterson, a research professor at Michigan Technological University and a member of the study’s research team, said to the Capital News Service of this rescue, “It might be 20 years, but it’s all temporary.”

The key is Lake Superior’s freezing and forming ice bridges. If climate change keeps new wolves from reaching the island, they may need to be transported there periodically. Without enough of these essential predators taking the old, young, and ill, moose will ravage the island’s forest and eventually begin to die of starvation.

Posted by Rick Lamplugh at 5:54 AM