PART 4: Protected Wolves Can Save Deer and Elk 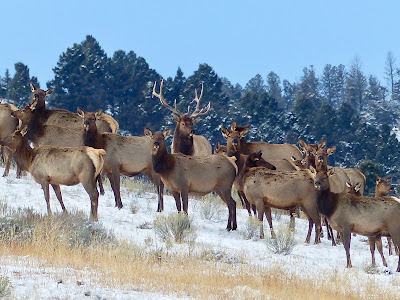 If the US Fish and Wildlife Service succeeds in removing wolves from the protection of the Endangered Species Act in the lower 48, more wolves will die. This at a time when chronic wasting disease is spreading across the US killing deer and elk. A large and protected wolf population may be able to slow the spread and help save deer and elk, but not if thousands of wolves are killed for sport.

CWD is highly contagious among deer, elk, moose, reindeer, and caribou. Since first identified in a captive Colorado mule deer herd in 1967, wildlife managers have been unable to stop CWD’s spread. Fifty-two years later, CWD is now in captive or free-ranging herds in 25 other states north, south, east, and west of Colorado.

CWD is caused by a naturally occurring protein, called a prion, that becomes misfolded and resists being broken down in the way a healthy animal's body normally does. When these prions are introduced into an animal, they multiply and damage the animal’s nervous system. CWD is not treatable and is always fatal.

The disease spreads as an infected animal sheds prions into the environment through its urine and feces, saliva and blood. Once an animal dies, its carcass can infect. Research shows that shed prions can survive for years on plants and in soil, where other animals pick them up and become infected.

After an animal contracts CWD, writes Lisa Ballard in Nature.org, “It is undetectable to the naked eye for almost two years, until the animal is within only a few months of death. At that point, the symptoms become obvious, including droopy ears and a malnourished appearance. As abnormal prions increase in the brain and nervous system, the animal functions less normally in every way, including how it eats, causing it to literally waste away.” Hence the disease’s name.

While CWD may be undetectable to the human eye for almost two years, could a wolf detect an infected animal sooner? Wolves, after all, make their living by finding the most vulnerable prey, a necessary strategy when you can be injured or killed just trying to bring down dinner. So if hungry wolves detected a vulnerable elk suffering with CWD, they might bring down that elk and in doing so could reduce the chance of that animal passing the disease to others.

Are their options to control CWD that don’t include wolves? CWD-INFO.org reports that veterinarians controlled small CWD outbreaks on game ranches by slaughtering every animal in the exposed herds—at a cost of more than $12 million in Colorado alone.

So naturally occurring wolves, with their uncanny ability to spot vulnerable prey, could be a readily available and less expensive way to slow the spread of CWD. But as CWD-INFO.org points out, this is only a theory. “No one has been able to study whether wolves single out CWD-infected animals because the range of predator and disease have never overlapped.”

CWD In the West

But now that CWD has reached Wyoming and Montana, two states with abundant elk, deer, and wolves, that theory can be tested in real life.

CWD was first recognized in Wyoming in 1979 in a captive mule deer herd in the southeastern part of the state. In November of 2018 the first case of CWD in a mule deer was confirmed in Grand Teton National Park in western Wyoming.

CWD was discovered in a deer near Billings, Montana in October of 2017. In May of 2019 Montana Fish, Wildlife & Parks (FWP) reported that CWD was found in a whitetail deer in Libby, the first detection in a wild animal in western Montana. Though there is no evidence yet that CWD can infect humans, FWP agrees with the recommendation of the Centers for Disease Control and Prevention that we should not consume animals infected with CWD. FWP encourages hunters to have their animals tested before eating the meat when hunting in areas where CWD is known to exist.

Updated maps created by Wyoming Wildlife Advocates and Sierra Club Wyoming Chapter show where and at what rate the disease has spread. The maps confirm that CWD in elk is within 42 miles of Yellowstone and 76 miles of elk winter feedgrounds just south of Grand Teton. The two organizations write in a May 2019 press release, “Scientists fear that when the disease reaches any of Wyoming’s 22 elk feedgrounds or the National Elk Refuge, where elk are densely packed together for the winter months, it could spread rapidly with potentially devastating results throughout the region.” They recommend that Wyoming “value and conserve carnivore populations to help keep deer and elk herds disease-free…”

How can wolves help fight CWD?

In May of 2019 Todd Wilkinson of Mountain Journal interviewed world-renowned biologist Andrew Dobson. When asked about the role wild predators can play in slowing the progression of CWD, he replied, “Wolves and coyotes are our strongest defense against CWD, particularly wolves—they are pursuit predators who always focus on the weakest animals in a group of potential prey.  As CWD manifests itself by reducing locomotory ability, wolves will key in on this and selectively remove these individuals from the population. These animals are then not available to infect uninfected individuals in the herd…” Dobson, by the way, theorizes that eradicating wolves in the early part of the 20th century allowed CWD to take hold in the first place. So it makes sense that increasing wolf numbers could help control the spread of the disease.

The way to increase wolf numbers, of course, is to stop the recreational killing of wolves. That requires keeping them protected under the ESA. In December of 2018, Montana biologist Gary Wolfe told the Public News Service that halting recreational hunting of large predators like wolves or cougars in areas with emerging CWD outbreaks could curb the disease. "Those predators can be more effective at taking out weakened animals from the population than the hunter will be by randomly taking animals out of the population.” But he adds that there would be major pushback from hunters if recreational hunting were cut back. And as a former Montana Fish & Wildlife commissioner, Wolfe should know. He has painful experience with how hunters react when told to kill fewer wolves.

In 2017 Wilkinson of Mountain Journal wrote a comprehensive four-part series on CWD. He researched and interviewed a large number of experts about the role that predators, including wolves and mountain lions, can play in slowing CWD's spread. Here is some of what the experts said.

Kevin Van Tighem, a hunter and former superintendent of Banff National Park in Alberta’s Canadian Rockies: “I don’t know of a single credible biologist who would argue that wolves, along with other predators and scavengers, aren’t important tools in devising sound strategies for dealing with CWD.”

Dr. Valerius Geist was interviewed by the Denver Post about the spread of CWD through deer and elk in troubled Colorado. He said, “Wolves will certainly bring the disease to a halt. They will remove infected individuals and clean up carcasses that could transmit the disease.”

Dr. Paul Paquet, the noted American-Canadian biologist has monitored the spread of CWD in relation to wolf populations. He told Mountain Journal, “To date and in general, CWD has not thrived where wolf populations are active, although the disease has appeared on the margins of these populations. A simple mapping of the distribution of wolves and CWD is very instructive.” [When I looked at maps, I found that CWD exists in all three of the Great Lakes states. But in each of those states the wolves are in the north and CWD, according to the 2019 USGS map, is in the south.]

Norman Bishop, before he retired, spent 36 years with the National Park Service. He helped draft Yellowstone’s environmental impact statement on wolf reintroduction. He has given more than 200 public presentations on wolves’ ecological role. Bishop told Wilkinson, “Wolves are out there sweeping the landscape 365 days a year, rooting out sick animals. Why would you want to remove the best weapons you have? It makes no sense. What do the states have to lose by bringing predators into this fight which basically means just leaving them alone to do their jobs?”

What Can You Do to Help?

To read the Mountain Journal 4-part series on CWD