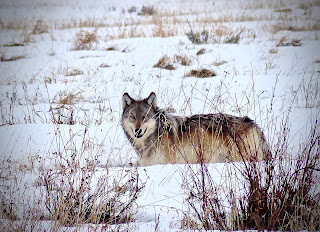 This is the first in a series of posts explaining why wolves should remain protected under the federal Endangered Species Act. The US Fish and Wildlife Service wants to delist gray wolves nationwide. The agency states that wolves have met recovery goals and even calls gray wolf recovery “one of the greatest comebacks for an animal in U.S. conservation history.” But is it?

Estimates of the number of wolves that once roamed North America go as high as two million. Whatever the actual number, after years of being unprotected from hunting, trapping, and poisoning, the USFWS now counts just over 6,000 wolves in the lower 48. And wolves occupy less than 10 percent of their historic range in the lower 48. This doesn’t sound like recovery to me. And it doesn’t sound like the agency has fulfilled its required mission of using the Endangered Species Act (ESA) to help this wide-ranging species spread to more territory.

While the USFWS claims that this delisting will be made on the basis of science, that wasn’t the case in 2011, when wolves in Montana and Idaho, the eastern third of Washington and Oregon, and a small part of Utah lost endangered species protection via a congressional rider attached by Rep. Mike Simpson (R-Idaho) and Sen. Jon Tester (D-Mont) to a must-pass budget bill. That was pure politics. And the delisting being considered now also seems politically based.

The USFWS states “…submissions merely stating support for, or opposition to, the action under consideration without providing supporting information, although noted, will not meet the standard of best available scientific and commercial data. Section 4(b)(1)(A) of the Act directs that determinations as to whether any species is threatened or endangered must be made solely on the basis of the best scientific and commercial data available.”

In other words, if you simply write “Leave wolves alone!”, the USFWS will give your comment little weight. The agency can also downplay petitions or form letters. So I urge you to write in your own words a science-backed reason to keep wolves protected. You don’t have to be a scientist to do this, and I know that many wolf advocates have the motivation to write very effective comments.

This post provides an introductory list of reasons—good starting points for your science-based comments. Ample supplemental information can be found online from other reputable sources. Subsequent posts in this series will dig deeper into the science behind keeping wolves protected and their population growing instead of unprotected with their population stagnant or declining.

Reasons to Keep Wolves Protected and Their Population Growing

Wolves need connections between territories in order to stay genetically healthy. The USFWS focused gray wolf recovery in three regions in the lower 48. So wolves live in isolated regions and as human development continues, wolves’ isolation will increase. Unprotected wolves dispersing across invisible state lines in search of mates from unrelated packs will do so at the risk of death. Nationwide ESA protection gives wolves a chance to move across the lower 48 in search of mates, territory, and genetic health.

Wolves are a keystone species and crucial to healthy ecosystems. The trophic cascade theory explains how wolves benefit ecosystems. Many reputable scientists support the theory, and Yellowstone National Park provides a great example. The reintroduction of wolves to Yellowstone changed the feeding behavior and movement of elk. This left more willows along streams. More willows attracted more beavers that built more dams. More dams created more wetlands that benefitted songbirds and other species.

Wolf kills benefit the land. A 2009 study in Michigan’s Isle Royale National Park found that wolf-killed elk carcasses increased levels of nitrogen and other nutrients in the soil.

Wolf-related tourism provides economic benefits. When wolves were reintroduced to Yellowstone National Park and Idaho in 1995, one study estimated that increased visitation due to wolf recovery would result in additional, annual expenditures of $23 million across Montana, Wyoming, and Idaho. Fourteen years later, a follow-up study found that those reintroduced wolves brought, on average, an additional $35 million annually in tourism expenditures for those states. As these expenditures rippled through the regional economy, they resulted in an estimated total increase in output of about $70 million annually.