PART 2: The Battle to Bring Wolves Back to Colorado 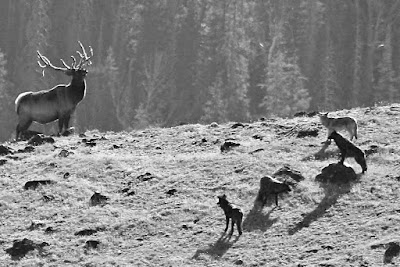 There’s a movement under way to reintroduce wolves in Colorado. And there’s a movement to keep them out. One anti-wolf site features four videos; each with a Coloradan explaining why reintroduction is wrong. Three speakers claim that wolves will decimate the state’s huge elk herd. But did that happen in Montana after wolves were reintroduced in Yellowstone and central Idaho?

There’s no doubt wolves eat elk. Wolves were reintroduced into Yellowstone in 1995 to help reduce the park’s out-of-control elk population. From Yellowstone they dispersed into Montana. Do these reintroduced wolves take so many elk that hunters now come up empty handed? Montana Fish Wildlife and Parks (MFWP) keeps thorough records on elk hunts and wolf populations, and I dug through both.

In 2005, ten years after that reintroduction, MFWP counted 256 wolves and hunters took more than 26,000 elk statewide.

In other words, after a thirteen-year period when Montana’s wolf population more than tripled, hunters still took more—not less—elk.

In August of last year, Montana Fish Wildlife and Parks issued a press release that forecasted hunting opportunities statewide. MFWP revealed that these are good times for elk hunters in Montana. Even with a growing wolf population, elk numbers remain strong across most of the state. However, MFWP adds, elk have changed their behavior: many take refuge on private lands, and that can reduce hunting success since in many hunting districts access to private lands can be difficult.

Elk have also changed their behavior in Idaho and Wyoming, where the fish and wildlife departments of both states report that elk hunting remains good even with significant wolf populations. Idaho reports that some elk have moved from wilderness and backcountry toward areas with more human presence and private lands where hunting access can be difficult. Wyoming reports that some elk have abandoned familiar migration routes and now spend time in areas shunned by wolves and grizzlies—areas that may be difficult to access or off limits to hunters.

In Yellowstone lives the Mollie’s pack, named in honor of Mollie Beattie, the late director of the US Fish and Wildlife Service. She was instrumental in Yellowstone’s wolf reintroduction.

Historically, the Mollie’s diet has varied by season. In summer and fall elk make up most of the pack’s diet. But once winter arrives and elk become scarce in the pack’s Pelican Valley home, the wolves have two choices.

First, they can switch to eating bison that winter in Pelican Valley. A bison is ten to fifteen times heavier than a wolf and armed with sharp horns and deadly hooves. Bringing down a bison is dangerous and may take days. But the hungry pack hunts smarter and succeeds.

Second, they can leave Pelican Valley and go where the easier-to-hunt elk go. That’s why the Mollie’s have travelled to the Lamar Valley each winter.

Empty-handed hunters have the same options as the Mollie’s. Hunters can stay in their preferred elk hunting unit but hunt smarter, or they can go where the elk now are.

Instead of villainizing and fearing wolves, Colorado hunters—if they’re willing to share the land—can learn from wolves. After all, wolves have survived on their hunting skills far longer than humans have.

Photo of elk standing off wolves by NPS

Posted by Rick Lamplugh at 9:04 AM