PART 1: The Battle to Bring Wolves Back to Colorado 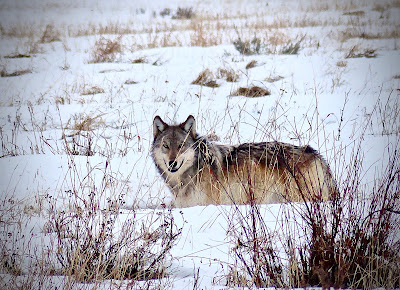 At one time, wolves roamed 41 of the Lower 48 states. It took just a couple hundred years to exterminate them in 95 percent of their range. In Colorado they were killed off by the mid 1940s. Now two organizations want to see wolves reintroduced into Colorado—the only Rocky Mountains state without wolves. In an innovative approach, the organizations are petitioning voters to place an initiative on the ballot. The initiative would allow voters—instead of unwelcoming state wildlife managers—to decide if wolves should return. Predictably, an anti-reintroduction organization has formed and wants to block any reintroduction.

Proponents of reintroduction must obtain 200,000 signatures to place the initiative on the November 2020 ballot. If Initiative 107 reaches the ballot, it will ask voters to approve a law that requires the Colorado Parks and Wildlife Commission to create a plan—using statewide hearings and the best available science—to reintroduce wolves on public lands west of the Continental Divide by the end of 2023. The commission would not be able to impose any land, water, or resource restrictions on private landowners to further the plan. The commission must fairly compensate owners for livestock lost to wolves.


With wolves now in Montana, Wyoming, Idaho, New Mexico, and Arizona, dispersing wolves have reached Colorado. Some have ended up dead: poisoned, hit by a car, and shot by a hunter claiming he thought he shot a coyote. Just recently a collared male last tracked near Yellowstone showed up in Colorado’s rural Jackson County.

With dispersers arriving, the Colorado situation is similar to the one in Yellowstone before reintroduction. Wolves had dispersed from Canada and taken up residence in northern Montana. In 1994 Montana had 50-60 wolves and they might have dispersed to Yellowstone eventually. In 1995 and 1996 sixty-six Canadian wolves were reintroduced into Yellowstone and central Idaho. Today more than 1500 wolves roam Montana, Wyoming, and Idaho. Though the reintroduction succeeded, many people opposed it.

And plenty of opposition exists today to reintroducing wolves into Colorado. In January of 2016 the Colorado Parks and Wildlife Commission issued a resolution opposing “the intentional release of any wolves into Colorado” because of conflicts with the livestock industry and big game management. No surprise there. The commission described both ranching and hunting as important to the state’s economy. A recent report by Jason Blevins in the Colorado Sun states that elk and mule deer hunting brings in $919 million to the state, especially in rural areas.

Of course, the anti-wolf Rocky Mountain Elk Foundation has weighed in against reintroduction. On their website, RMEF claims, among other things, that reintroduction “would trigger the potential for real issues” because Colorado is smaller than other wolf states and has more humans crammed into it.

Then there’s the newly formed Colorado Stop the Wolf Coalition. Their website brims with photos of bloody, ravaged livestock. They feature videos that present many “dangers” of bringing wolves back. They are sponsoring their own petition because “extreme activist groups want to force introduction of destructive non-native wolves onto public lands in Colorado.”

In this multi-part series, I will explore this battle to bring wolves back to Colorado. I will dig into the reasons presented by the RMEF and the Colorado Stop the Wolf Coalition against reintroduction. Are they fact or fiction?