A Brief History of Wolves and Humans, Part 2 of 3 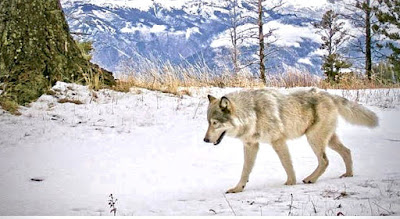 Any partnership hunters and gatherers may have had with wolves soured after our ancestors became herders. Once we owned land and raised livestock, we came to hate wolves and treat them as unwanted competitors. Our history degenerated from a tale of two species partnering to a sad story of one species with a powerful arsenal—and few thoughts of long-term consequences—waging war on another.

To understand this war, let’s use the Middle Ages (5th-15th century) as a starting point. That was a time when horrifying rumors—some true—about rabid wolves killing humans spread across Europe. Governments declared war on wolves. In France in the 800s, the government hired an elite corps of hunters to control the wolf population. In England in the late 1200s, King Edward ordered the extermination of wolves in some parts of the country. In 1427, James of Scotland passed a law requiring three wolf hunts a year, even during denning season.

Those European wolf wars were not waged in a vacuum; Europeans were struggling with numerous deadly challenges. A Little Ice Age chilled Europe, and some experts believe it began as early as the 1300s and lasted until the mid 1800s. During that Little Ice Age, temperatures fell, snowfall increased, and the growing season shrank. This reduced harvests and created painful shortages of crops and livestock.

Also during the early 1300s, and perhaps due to the Little Ice Age, the Great Famine struck, killing 10 to 25 percent of the population of many European cities and towns.

To make matters worse, in the mid 1300s, the Black Death peaked. That plague eventually killed at least a third of all western Europeans.

With families and friends starving and dying, few would accept wolves taking livestock. I can imagine the war cry spreading across the countryside: Protect our families! Protect our livestock! Kill all wolves!

Once the Black Death subsided, western Europe’s population rebounded and doubled by the early 1600s. According to Jon T. Coleman, author of Vicious: Wolves and Men in America, more Europeans meant more mouths to feed. More food meant more land for livestock and crops. And less open land for wolves.

Increased European population also increased colonization of North America. When colonists disembarked in the New World, wolves probably watched from the woods; an estimated two million roamed most of North America, though colonists rarely saw them since wolves avoided humans. Nevertheless, another war on wolves was about to erupt.

The New World siege started quickly. By 1625, colonists were using tactics refined in the Old World to stop predation, according to Barry Lopez in Of Wolves and Men. They also had firearms and could kill from a distance. They hired wolf hunters and passed bounty laws—the first in Massachusetts in 1630. Other colonies followed including New Jersey in 1697.

But historian Coleman argues that these immigrants and their descendants—our ancestors—added an American twist to wolf hatred. Given the colonists’ Old World view of wolves as monsters, you would expect New World settlers to have avoided wolves. Yet Coleman discovered records from as early as 1621 that show just the opposite. A settler, in one example, stumbled upon wolves at a deer kill, chased the wolves away, and swiped the meat. Records also document colonists encountering wolves and the frightened animals turning tail.

If wolves were such cowards, why did colonists treat them so viciously? Religion was partly to blame, says Coleman. “The biblical version of wolves with its focus on greed, corruption, and theft flourished in New England…” Colonists thumped the Bible to rationalize wreaking havoc on wolves for the crime of killing livestock.

Yet settlers aided and abetted the predators’ crimes by grazing livestock in wolf country without proper supervision. Coleman found colonists entrusted their herds to teenage boys “short in stature and attention span.” Wolves—hungry and struggling because settlers had overhunted their natural prey—took some livestock. This scenario moved west with civilization: Everywhere settlers killed off wild game and brought in livestock, wolves came to dine. Settlers fought back. But they didn’t just kill wolves; they ravaged them, Coleman says, because Euro-Americans fantasized…”to overpower savagery one must lash out savagely.”

Lashing out included creating fantasies that were the opposite of reality. Colonists portrayed wolves preying on humans. Reality: humans preyed on wolves. Colonists described howling wolves surrounding humans and inducing panic. Reality: humans surrounded and panicked wolves. This belief in a savage wolf—a figment in minds fed with fantasies—prompted vicious eradication of wolves. By 1840 wolves were extinct in Massachusetts and vanishing elsewhere.

Wolves didn’t fight back. Their natural intelligence, speed, strength, and teeth were no match for our big brains and big arsenals. By the mid 1800s, that arsenal included more effective rifles and strychnine. By poisoning a carcass, hunters could kill an entire pack.

But eliminating wolves wasn’t enough. Even as these essential predators vanished from the countryside, we kept wolves alive, feared, and hated in literature, especially in children's stories.

Take Grimm's Fairy Tales, for example. Though wolves were almost eradicated in Germany by 1812 when that book was published, it contained "Little Red Riding Hood," with its infamous wolf.

Around the same time—on a continent almost devoid of wolves—Europeans resurrected two thousand-year-old Aesop's Fables. Those stories contained "The Boy Who Cried Wolf," with its wolf destroying the flock of a lying boy, and “The Dog and the Wolf," with its wolf refusing to give up its freedom to become a collared, well-fed pet.

In 1886—more than three hundred years after the wolf was eradicated in England—“The Three Little Pigs" was published in The Nursery Rhymes of England. In that tale, a wolf with an insatiable appetite manages to eat two of the pigs before the third kills and eats him.

Stories such as these taught new generations to fear and hate wolves that didn't even exist.

The real danger for wolves today lies in this anti-wolf propaganda and hatred that sailed from the Old World to the New, underwent an American twist, and became imbedded in our culture.

This propaganda was institutionalized in the early 1900s by the U.S. Biological Survey—our government’s first wolf-killers. That agency and their prodigy, Wildlife Services—today’s secretive and out-of-control wolf killers—almost cleared the Lower 48 of wolves. Thanks to the Endangered Species Act, wolves have made a comeback. But even after seventy years with few wolves in the Lower 48, the propaganda, the lies, and the fantasies survived and today breed intolerance of wolves and spawn vicious anti-wolf acts.

Wolves suffer most where they are no longer federally protected, where states have the final word.  In states with powerful livestock industries, “wolf management” is a vow to kill all wolves except the minimum number required by a state’s federally approved wolf plan. Plans like those do nothing to reduce wolf hatred or wind down the war on wolves. Worse yet, they give the false impression that wolf survival is just a biological issue, a matter of the number of surviving breeding pairs.

Looking only at numbers obscures the truth: To protect wolves, we must transform our nation’s culture from one that wages war on wolves to one that respects wolves. Wolf hatred was centuries in the making and will not succumb to reason quickly. Until then, wolves need federal protection from hunting and trapping. Wolves need a national wolf recovery plan.

(This post based on a chapter for In the Temple of Wolves.)

To Read Part One of This Series 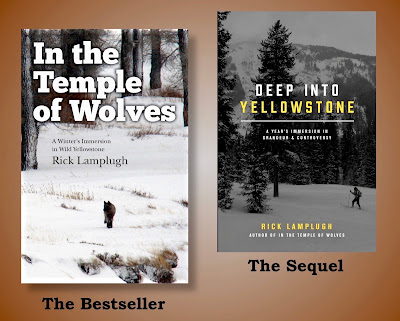 Wolf photo at top of post by ODFW
Posted by Rick Lamplugh at 9:05 AM