The Impact of Wolf Hunting Near National Parks 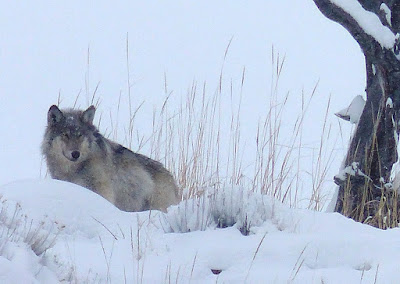 The recent shooting by a hunter of 926F, a collared female admired by wolf watchers, has reignited the debate on hunting wolves near national parks. Protected in parks—as 926F was in Yellowstone—wolves can hunt, breed, and raise families without fear of humans. Watching them do so excites and educates tens of thousands of park visitors and informs many scientists. But once wolves step outside a park they can become trophies—as 926F did—for a few hunters or trappers.

This conflict between watching or hunting wolves occurs in Yellowstone, Denali National Park and Preserve in Alaska, Algonquin Provincial Park in Ontario, Banff National Park in Alberta, and Kluane National Park in the Yukon Territory, according to Bridget Borg, in her 2015 published Ph.D. dissertation.

Borg analyzed how the loss of a breeding wolf in Denali changes the stability and growth of the breeder’s pack. She studied packs that had dissolved in Denali from 1986 to 2012.  She found that breeder loss preceded the break up of three-quarters of those dissolved packs. She found that packs were more likely to dissolve if a female or both breeders were lost and pack size was small. In short, shooting a breeder can kill an entire pack.

In 2016 Borg, a Denali wildlife biologist, and other authors including Yellowstone’s Doug Smith, Rick McIntyre, and Kira Cassidy analyzed how the hunting of wolves along the boundaries of Denali and Yellowstone altered wolf-viewing opportunities. The study’s key finding: Visitors to national parks are only half as likely to see wolves in their natural habitat when wolf hunting is permitted just outside park boundaries. Adjacent to Denali, wolves are primarily trapped. Adjacent to Yellowstone, wolves are trapped and shot—like 926F and her mother, the even more famous 06—during hunting season.

So, there’s the conflict: when a wolf leaves a park and a hunter takes a trophy, a pack can be shattered and tens of thousands of park visitors can be deprived of seeing that wolf--and other wolves--in the wild. Additionally, if the wolf is collared, as 926F and her mother were, scientists lose valuable sources of information about wolves and their behavior. Is there a resolution?

In Borg’s dissertation, she wrote that closure of the buffer zone around Denali would present “the optimal solution.” Because only a handful of trappers operate in Denali’s buffer zone in any given year, and over 400,000 people visit Denali National Park and Preserve annually, the closure, she wrote, could have “a negative impact for a few with a positive outcome for many.”

The National Park Service provided major funding for both these studies. That’s understandable since the NPS must protect wildlife populations and wildlife viewing opportunities. Meanwhile, on state lands adjacent to Yellowstone or Denali, the respective fish and wildlife departments must provide for hunting and trapping as well as wildlife viewing. This deadly conflict over what to do with wolves is built into the different missions of these federal and state agencies.

For me, the answer to the question of whether to watch or hunt wolves next to Yellowstone is clear. The Montana Fish and Wildlife Commission should close the two hunting districts north of Yellowstone to wolf hunting and trapping. This policy change would save the lives of at least four wolves each year. And if those saved wolves were breeders, their continued existence would avoid the disintegration of their families. If those wolves wore collars, scientists would not lose valuable sources of information. This policy change would also mean more people would see more wolves in the wild.

Such wildlife watching is the economic backbone of Yellowstone’s gateway towns, like Gardiner, Montana. According to Kitty Block, acting president and CEO of the Humane Society of the United States, wolf- and grizzly-bear-watching tourism drives more than $1 billion in annual revenues to Idaho, Montana, and Wyoming, funding thousands of jobs. According to a report by the U.S. Fish and Wildlife Service, wildlife watchers outspent hunters in 2016 by a ratio of nearly 3 to 1.

But closing the two districts adjacent to Yellowstone to wolf hunting and trapping permanently is not allowed under Montana law. Nor is such a closure wanted by most hunting organizations.

I, as one of the representatives of Gardiner’s all-volunteer Bear Creek Council, along with Wolves of the Rockies and other conservation organizations, have fought to bring the quota in each of those two districts down from six wolves to two. But the impact of killing wolves near national parks makes clear that a quota of two wolves is two too many.

WHAT YOU CAN DO:

Support Wolves of the Rockies in their efforts to provide permanent protection to Yellowstone's wolves.

Read my post with excerpts from Marybeth Hollerman’s powerful article about the impact of hunting on the delicate social structure of a wolf pack.