We Have More to Fear from Livestock than from Wolves 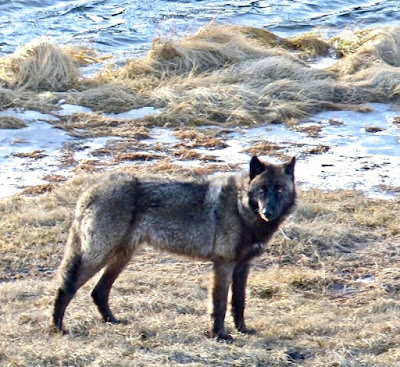 I often wonder why the drive to delist wolves never ceases. The livestock industry leads the charge with their claim that wolves killing livestock threatens ranchers' livelihoods. Their claim is not only wrong, it’s a smoke screen that hides the real problem: The livestock production that sustains ranchers harms the ecosystem that sustains the rest of us.

The study analyzes meat consumption in sixteen countries and calculates that animal products make up almost half our nation's diet. We consume more animal products than all but one of the other countries.

The study’s authors, Brian Machovina, Kenneth J. Feeley, and William J. Ripple, conclude that livestock production is a leading cause of climate change, soil loss, water and nutrient pollution, and the decline in apex predators and wild herbivores.

Meanwhile, other studies show that wolves don’t have such harmful impact. Instead, these essential predators actually improve the ecosystems in which they are allowed to live. From giant aspen to tiny beetles, a life-improving benefit trickles down where wolves are allowed to live.

Denying how wolves benefit our world, the livestock industry in the US fabricates a wolf problem and then promotes a way to deal it: Strip away Endangered Species Act protection and allow wolves to be hunted. One bullet at a time, the fabricated wolf problem will disappear.

Delisting bills that pass do so because bill supporters frame the gray wolf as a violent predator and tell stories of the animals killing livestock or pets and wreaking havoc in other ways.

But what can the rest of us do about the real—and much bigger—problem: the trampling of habitat and biodiversity under the hooves of livestock? The study’s authors suggest solutions; here are two:

Livestock producers, their hired guns, and their political allies know that solutions such as these will be more costly and cause more grief than wolves ever have or ever will. Reducing the demand for cattle, sheep, and goats will drive some ranchers out of business. Some survivors will have to struggle to raise livestock in a more ecosystem-friendly way. Some will have to finance the costly move to producing poultry or pigs. So to avoid all this, the livestock industry keeps beating the Big Bad Wolf drum.

But the rest of us must acknowledge the real problem: We have far more to fear from livestock than we do from wolves. We cannot sacrifice our country’s life-sustaining habitat and its irreplaceable biodiversity—which includes wolves—for the benefit of a good steak and the ranchers who produce it.

To Read the journal article

This post based on a chapter from the bestselling In the Temple of Wolves.

Posted by Rick Lamplugh at 6:24 AM