An Inside Look at Capturing Yellowstone's Bison: A Photo Essay 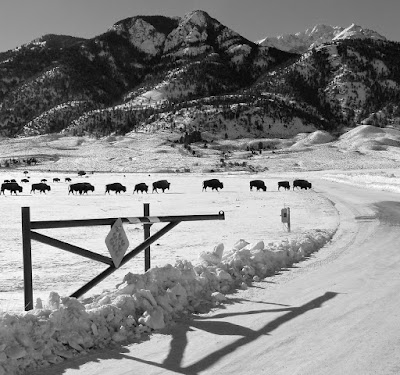 On 3/1/20 the National Park Service announced that the Stephens Creek bison capture facility (the trap) is open for business inside Yellowstone. The trap opened late this year because the bison waited a long time before migrating.

The trap run by the National Park Service is a deadly cog in the controversial Interagency Bison Management Plan (IBMP). Two concepts sit at the heart of the plan: migration and social tolerance. Bison--in a race between starvation and spring--migrate out of Yellowstone each winter in search of grass not locked away under ice or snow. The state of Montana has no tolerance for bison outside the park near Gardiner and West Yellowstone. State officials claim this is because some bison are infected with brucellosis that can be transmitted to cattle. But there has never been a documented case of brucellosis transmission from wild bison to cattle.

This unfounded fear of brucellosis was one factor leading to the creation of the IBMP—a court-ordered coalition of federal and state agencies and some tribes. The IBMP calls for the capture of bison at Stephens Creek and for their shipment to slaughter in Montana. It also calls for a hunt (a firing squad, really) just outside the park to further reduce Yellowstone's bison population. This winter the IBMP goal is to remove 600-900 bison from the herd of 4,900, though that may not happen because the bison stayed in the park longer.


Along with members of the media and conservation organizations, I toured the Stephens Creek facility in the winter of 2016 and 2017 when bison were in the trap. (The 2018 tour was cancelled due to security concerns. No tour was scheduled in 2019 or yet in 2020.) Below are fourteen photos I took during the tours. I've added captions that explain how bison are handled at Stephens Creek.


All photos by Rick Lamplugh

Posted by Rick Lamplugh at 7:18 AM