The Bison's Last Ride: An AudioPost 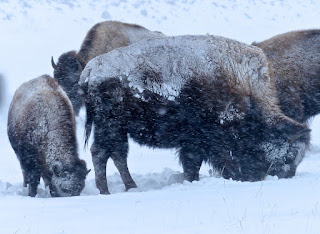 “I think it’s a female yearling,” Brian, the district ranger, says to the four of us standing across from him. The bison, a sad lump dusted with fresh snow, fills the space at our feet.

I nod toward him but can’t take my eyes from the bison calf; she’s beautiful, even in death. Short horns reveal her youth. Her brown eyes are still bright and inviting. I remove my glove and feel the long hair on her side; its softness surprises me. I run my hand down her thin leg to what looks like a smooth-sided hoof. But the hoof is encircled with tiny ridges, and I, fascinated, run a fingernail over each ridge. George, Karen, and Mary, squatting and kneeling, also caress her. We share a reverent moment, as you would at the bedside of a just-departed loved one.

Brian’s soft voice interrupts, “That makes me think it was hit by a car.” He points to the blood drying around the nose and mouth.

That’s a possibility since the bison was found dead on the road before dawn east of here. At first light she was dragged for four miles behind a snowplow to this roadside pullout. Now we are going to sled her farther from the road.

We muscle the 500-pound calf onto a big, plastic sled. Then Brian pulls a radio from his jacket, listens, signs off, and says, “That was the Comm Center. They just had a call from two visitors who reported hitting a bison in the dark and snow this morning.” He pauses as if delivering a punch line. “They said the bison walked out in the road and hit their truck.” He shakes his head, and we all laugh. 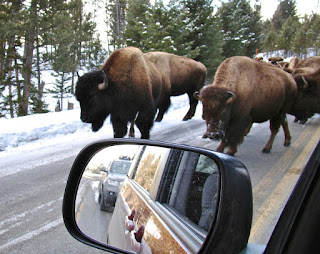 After a couple of months of driving along snowy park roads, we’ve seen how it probably happened. Calves are always with a herd, and often that herd is walking down the middle of the plowed road, the easiest path in winter. We’ve watched cars barge into a herd, impatient drivers rushing to get through. In a situation like that, a spooked animal could swing its head and get clipped. Such waste saddens me.

However death occurred, it’s time for the yearling’s last trip across the valley floor. I snowshoe alongside so I can video the procession. Breath billowing and bent forward, the four haul the sled to the top of a rise. When they head downhill, I notice that the sled is gaining on them.

Four heads snap around. Each team member jumps to the side. The sled stops where they had been. We look at one another and then laugh about how difficult it would have been to explain to our manager that three of her volunteers were injured by a sleigh-riding bison while the fourth videoed the mishap.

We continue on and about three-quarters of the way to the cottonwoods stop. The reality of our task hits: We are looking for the best place for others to dine on this beautiful, young animal.

On the count of three, we hoist one side of the sled. The calf flops into the snow. The four of us volunteers encircle the bison, mourners at a graveside. A bald eagle lands high in the nearby cottonwoods, waiting.

Brian pulls the sled away, and the others snowshoe in silence behind, family following the hearse from the cemetery. I stay and walk to the bison’s head. Snowflakes land on the eye and don’t melt. Beneath the cottonwoods, a coyote has joined the eagle. I whisper an invitation to the scavengers. I thank the bison for providing them sustenance and then turn and snowshoe toward the road.

Three weeks and three snowstorms later, Mary and I return to the pullout from which we sledded the yearling. We want to see what remains of the carcass. The path we made for the bison’s last ride has disappeared. We don snowshoes and guess our way along, but we can’t find the remains. We squat down in the snow and wait. 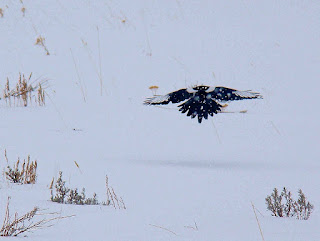 Just as we are starting to feel too chilled to stay, a magpie lands about twenty yards away and starts walking and pecking. We rise and move toward it. We spot strands of hair and fragments of bone and Mary drops to all fours and starts sweeping away snow. A few inches below the surface, she uncovers a frozen rug of bison hide. Nearby, she discovers a blood-stained bottom jaw with unworn teeth. I dig around, come up with a hoof attached to a leg bone. I take off my glove and again feel the hoof’s ridges.

With respect, I replace the leg and then snowshoe over to kneel beside Mary. She turns to me and her eyes hold both sadness and curiosity. She nods toward where she has been digging, and we begin to cover the hide and put the bones back. The bison’s return to earth isn’t done yet, and we don’t want to interfere.

In a month or two, when the snow thaws and spring greens this valley, hundreds of species of beetles and other insects will dine on these scraps. Anything left will begin breaking down into minerals that will enrich the soil and feed the grass. Where we now kneel in snow will be a sweet spot for bison grazing near the swollen Lamar River. A mother and her calf could be drawn here by the scent of new grass. The calf, still young enough to be mistaken for a big, red dog playing near the herd, will eat its fill, enriched by the yearling we pulled here.

Mary and I stand, hold hands, and snowshoe back toward the road, closing the circle on a touching farewell and funeral service.

This post based on a chapter from the bestselling In the Temple of Wolves.