Meet Your Bear: An Excerpt from The Wilds of Aging 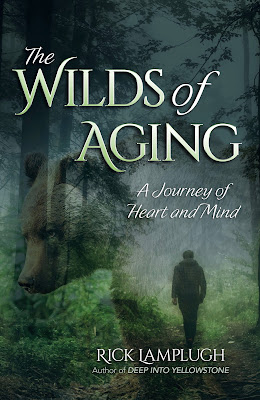 After that worrisome winter passed and spring blossomed, the time came to arrange upcoming summer adventures. I faced a dilemma: I loved adventuring but sensed that if I was to grow through this floundering phase, I had to bail out of all upcoming external adventures with Mary and my friends and start a solo internal journey. I had to explore my fears, my mortality, and the concept of afterlife—the wilds of aging—just as I have explored wild lands.
Mary and my friends would eventually call this my morose period. Some saw it as an exercise in self-pity. But whether they liked it or not, whether I liked it or not, I felt compelled to make this my next adventure. Or, as Mary and I termed it on a trip to Yellowstone a few years ago, I had to meet my bear.
***
After we had spent several days and nights deep in Yellowstone’s backcountry and had grown more comfortable with its wildness, we planned to spend the day hiking into the middle of the upper Lamar Valley, where wolves, bison, and bears roam. We hoped to see some of these creatures, and the wide-open spaces of the valley would allow us to do so from a safe distance. We parked the car along the road, put on our daypacks, and started hiking toward the distant Lamar River.
As we walked along the valley floor, a solo hiker with long strides overtook us and stopped to chat. He looked to be about twenty-five years old. A faded green baseball cap pushed raggedly cut brown hair over the tops of his ears. His face was ruddy, with a strong chin accented by the red bandana around his neck.
When Mary asked where he was going, he turned away from us, pointed toward the distant mountains, and said that he had eleven more miles to go before reaching his campsite along the Lamar River.
While his back was turned to us, I studied his blue backpack. It was loaded, compact, and organized, the pack of an experienced hiker. That relieved me, as he was heading for a wild part of Yellowstone.
“Have you seen any wildlife?” Mary asked.
He turned back to us, smiled, and said, “I saw the same grizzly four times when I was camped along the Lamar last week.”
“Four times?” I asked in amazement. “And you stayed?”
“Yeah. And it definitely knew I was there. One time when I poked my head out of the tent it was upriver looking in my direction.”
“That must have been a little scary,” Mary said.
“It was,” he said, tugging his cap down tighter onto his head. “And that’s why I’m going back to the same spot.”
“So you can see the griz again?” I asked.
“I sure hope so,” he said with a dimpled smile.
After the hiker left, Mary and I walked on, holding hands and talking about him. He seemed like a capable backpacker, not a tourist in a hulking rented motor home asking where he might find a roadside bear to photograph. But still, he was returning to a potentially dangerous situation, one that had scared him just days earlier. He was, we decided, going to meet his bear.
That saying became shorthand we would use to describe intentionally going to places—mental, physical, or emotional—that scare us.
***
As I considered a solo journey to meet my bear, I understood that its challenges would not be measured in miles cycled or mountains climbed. Instead, the milestones would be emotions felt, bodily changes acknowledged, friends and loved ones lost, and maybe even wisdom gained.
Of course, I would journal, just as I had on adventures beside countless mountain streams or country roads. But on this journey I would write in our backyard.
And I would do more than write. After thirteen years away from serious gardening—at one time, digging in the garden was as predictable as spring equinox—I yearned to dig again, to see what I could nurture in the garden as I coaxed changes within myself. I would even try gardening year round, a new approach that would allow me to work—and write—in the garden whenever I needed to, be it spring, summer, fall, or winter. The garden would become my refuge where I could dig deeply into growing and dying.
As seasons came and went, I would see which plants grew, which feelings sprouted, which ideas blossomed. I would cultivate an understanding of where I had come from and where I was going now that the deaths of Jana, Daniel, and Misty and that tough summer of biking and hiking had finally smashed my wall, shattered that illusion of unending youth.
As my life felt up for grabs, I decided to meet my bear. To retreat to the garden.

Posted by Rick Lamplugh at 1:18 PM