How Bison Arrived in North America 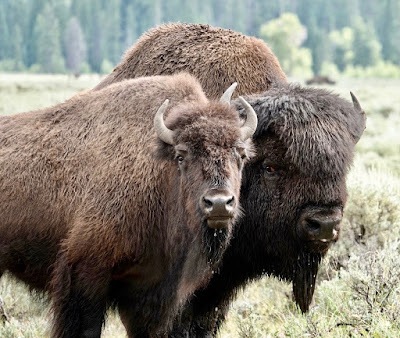 While bison began to evolve two million years ago, we’re going to pick up their story a mere 200,000 years ago. That’s when the first bison to reach North America stepped into what we now call Alaska. These bison had grazed their way north through Asia and then followed their noses across the Bering Land Bridge after Ice Age glaciers trapped so much water that the level of the Bering Sea fell and exposed land between Asia and Alaska. This steppe bison (Bison priscus) was much bigger than today’s bison with larger horns that curved forward and a thick mane over its shoulders, according to James Bailey in American Plains Bison: Rewilding an Icon.

By 130,000 years ago a different type of bison had made its way south of the glaciers and onto the Great Plains. The males of this giant bison (Bison latifrons) had horns that spread up to seven feet across, says Bailey. They were up to eight feet tall at the shoulder hump and half again as large as today’s bison.

Natural selection worked its wonders. The larger bison with bigger horns could repel attacks by big predators. The survivors could pass on the genes of those big horns and big size to yet another generation.

Of course, bison weren’t the only possible meal for big predators. At least thirty-two other large herbivores shared the landscape with bison. Bailey says this collection created a diversity of wildlife on the Great Plains that rivaled the wildlife diversity in today’s Africa. But that diversity shrank as the Ice Age ended and mastadons, wooly mammoths, wild horses, camels, and many other large herbivores disappeared.

But bison survived that mass extinction and with so many competitors for grass gone, bison expanded their range and population.

By 110,000 years ago, the ancestors of Yellowstone’s bison appeared. Though this animal (Bison antiquus) was smaller than the bison that preceded it, it was still, says Bailey, 20% larger than today’s bison. This smaller bison increased in numbers as the population of larger bison decreased.

The size of predators and the reduction of competition weren’t the only factors influencing how bison evolved. Bison were affected by the Ice Age climate they lived in. We often think of the Ice Age as a period of constant cold, but during the hundreds of thousands of years of the Ice Age there were periods both cold and warm. The cold phases favored the survival of large animals. The warmer phases favored smaller animals. 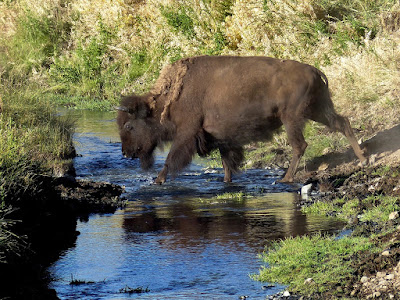 By the time the Ice Age ended, the steppe bison and giant bison had vanished from the land. As the climate warmed to what we experience today, the one remaining type of bison evolved into the even smaller bison (Bison bison) that now roams Yellowstone.

It’s hard to imagine bison far larger than Yellowstone bison. It’s hard to grasp that this incredible animal is the result of two million years of evolution, that its ancestors survived while other large herbivores perished. It’s hard to accept that such a magnificent animal is now trapped in Yellowstone, unable to leave the park without being shot or captured.

Of course the culprit behind this travesty is another species, we humans, that also crossed the Bering Land Bridge, entered North America, and headed south. When the paths of humans and bison intersected, the evolution, the very existence, of bison would change. But that’s a story for another day.