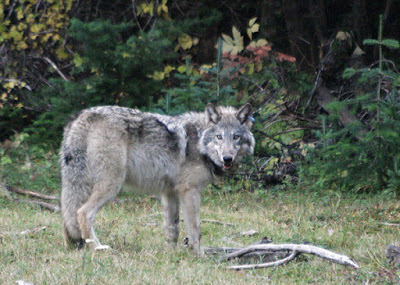 Proponents of reintroducing wolves into Colorado obtained enough signatures to place Initiative 107 on the November ballot and let voters decide whether wolves will return. The proponents' success kicks into high gear their opponents' misinformation campaign. Let’s correct some of the false claims.

Opponents claim this reintroduction is being forced upon Colorado by “out-of-state radical environmental groups.”

Opponents claim that allowing voters to decide on reintroduction is misguided since voters don’t have the knowledge needed to make a sound decision.

The fact is that voters won’t create the reintroduction plan. Initiative 107 will ask voters to approve a law that requires the Colorado Parks and Wildlife Commission to create the plan—using statewide hearings and the best available science—and reintroduce wolves on public lands west of the Continental Divide by the end of 2023. The commission would not be able to impose any land, water, or resource restrictions on private landowners to further the plan. The commission must fairly compensate owners for livestock lost to wolves.

It is true that Colorado is the first state to use a voter-based initiative to decide whether to reintroduce wolves. There’s a reason that approach was necessary. In January of 2016 the Colorado Parks and Wildlife Commission issued a resolution opposing “the intentional release of any wolves into Colorado” because of conflicts with the livestock industry and big game management. With the commission refusing to consider reintroduction, proponents had to look for another strategy. They chose the innovative approach of asking voters to decide.

Opponents claim there is no need to reintroduce wolves into Colorado; wolves are already in the state and more will surely follow.

Some wolves have reached Colorado and most have ended up dead: poisoned, hit by a car, and shot by a hunter claiming he thought he shot a coyote. In July of 2019 a collared male from Wyoming’s Snake River pack arrived in Colorado’s rural Jackson County and is still being monitored. Recently Colorado Parks and Wildlife said they had evidence that a pack of perhaps six wolves was “likely present” in northwestern Colorado.

That’s it: a confirmed lone wolf and a “likely” pack after a quarter-century of wolves spreading elsewhere in the Rockies.

Opponents claim that it’s the people who live on the urban Front Range, people who won’t have to deal with wolves, that favor reintroduction onto the rural Western Slope.

Colorado Public Radio reported that one online poll found two-thirds of Colorado voters favor reintroduction and only 15 percent oppose. CPR added that the poll didn’t show much of a split between Colorado’s Front Range and the Western Slope, suggesting the issue might not divide urban and rural parts of the state.

There is resistance from certain Coloradans. Denny Behrens of Colorado Stop the Wolf Coalition told reporters that 23 Colorado counties have passed resolutions against reintroduction. Rob Edward of the Rocky Mountain Wolf Action Fund counters that these resolutions are from rural county commissions that are usually stacked with or friendly to agricultural interests. These resolutions, he adds, have no power over the ballot process.

Between now and the election, the misinformation campaign will be in high gear.

Photo of wolf OR-10 by ODFW

Posted by Rick Lamplugh at 5:40 AM