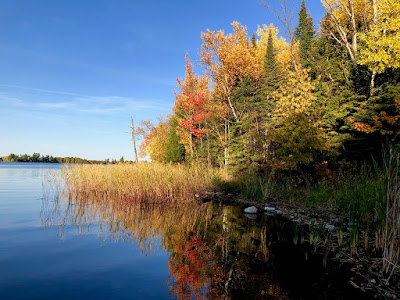 10/8/19: We arrived yesterday at Kabetogama State Forest in the North Woods of Minnesota. The campground we chose has 61 spaces, none occupied. Happy to be alone, we selected a site, set up our teardrop trailer, and went for a walk. The fall color change is peaking in this diverse forest. Dark green conifers highlight bright orange, red, and yellow deciduous trees. Soft sunlight creates contrast while an almost cloudless sky provides a stunning backdrop.

We reach the shore of Kabetogama Lake where reflections capture our eyes and steal our breath. Mary and I quietly dance around each other, cameras clicking, as we try to capture moments of color and texture, movement and reflection.

As the sun sets and the light fades, we meander to our camper and climb in for a quiet evening. While Mary works with photos, I study our road atlas and maps that show the locations of wolf packs in Minnesota, Wisconsin, and Michigan. I’m still refining—as I was before we left Montana—the best route through the wolf country in each of the Great Lakes states.

I don’t expect to see a wolf as we drive or walk in this wolf territory. Maybe we'll be lucky enough to hear one howl when we camp near areas that researchers say have lots of wolves. What I do want to see on this trip is the wolf territory in these three states where more than 4,000 wolves live. So far, their territory is covered with forests of diverse and closely packed trees: pines, spruces, firs, and junipers; aspens, oaks, birches, ash, and maples. When we peer into the dark understory, we can't help but wonder how wolves can run down prey amongst the close-set trunks. 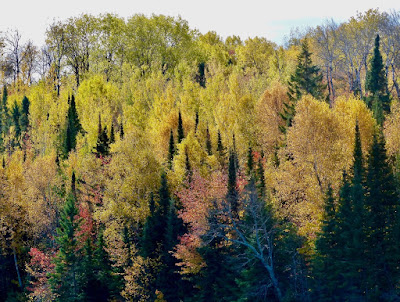 This shouldn’t surprise me; public land is the only home left for wolves wherever they’re allowed to live. But the small number of acres of public land and the large number of wolves in the Great Lakes states does surprise me. And makes me think of Colorado, where a battle rages about reintroducing wolves.

As we view mile after mile of northern Minnesota forest, I can’t help but wonder what western Colorado will look like. We will eventually get there before this 6,000 mile road trip ends around November 1. Once in Colorado, another of our goals is to explore one of the three areas where wolves might be released—if the reintroduction occurs.

To find territory that Colorado wolves might gravitate to, I researched elk hunting units in southern Wyoming and northwestern Colorado. Elk abound in each area, according to the fish and game departments of both states and several web sites dedicated to helping hunters find elk to kill. I figure that if there are plenty of elk to shoot, there are plenty of elk for wolves to bring down. And, unfortunately, there will be plenty of resistance by elk hunters to the reintroduction of elk-eating wolves.

Another point of contention in the reintroduction is the claim that there is not enough human-free space left for wolves in Colorado. Checking the reality of that claim is one reason we are touring wolf country in Minnesota, Michigan, and Wisconsin. Each of these states is more densely packed with people than western Colorado. Yet each supports a resident wolf population.

I’m heartened by what I’ve seen so far. Somehow more than 4,000 wolves have found a way to hunt and mate and raise young and disperse in these Great Lakes states. And the people living in this wolf country have found a way—however tentative or tumultuous it may be—to coexist with wolves for more than 40 years. No doubt the protection still provided by the Endangered Species Act helps. Just as that protection would help in Colorado.

In the end though, I don’t think a lack of wolf habitat or an abundance of people will decide the fate of Colorado wolves. The key factor will be whether the residents of western Colorado are willing to coexist with a couple hundred wolves.

I have no doubt that coexistence is possible: the abundant wolves and residents of the Great Lakes states show that. 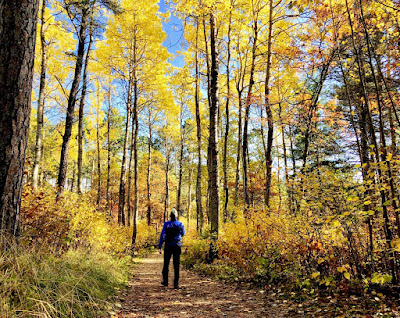 Wolf photo by USFWS. Other photos by Rick Lamplugh and Mary Strickroth

Posted by Rick Lamplugh at 2:36 PM