It's Time to Thank Wolves 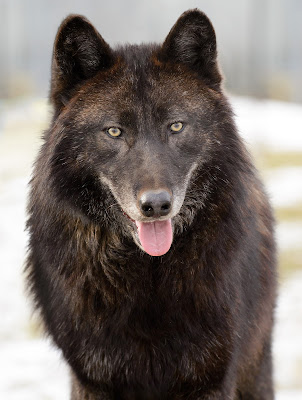 As the season of giving thanks arrives, I think it’s time to thank wolves, fine creatures whose ancient ancestors befriended us, shared with us, and taught us.

Ancient wolves, for hundreds of thousands of years, dogged herds of reindeer that migrated between what is now Spain and Siberia. After the last Ice Age, early humans may have watched wolves bringing down reindeer. Our ancestors may have been as hungry as those wolves and wondered how to plunder some of their competitor’s bounty. But a few humans, no matter how desperate, couldn't just take a wolf pack's kill.

Early humans, though, were superior to wolves in some ways, say Wolfgang Schleidt and Michael Shalter in a journal article, “Coevolution of Humans and Canids.” Humans have greater cognitive ability. Humans can see better at longer distances because we stand taller than wolves. Humans with weapons can hit a target from a distance. Early humans, the scientists believe, could have used these strengths to partner with wolves in hunting.

Ancient wolves hunted, as they do now, by sorting and sifting a herd to expose the animal that requires the least effort to bring down. Once wolves cut that animal from the herd, the dangerous work begins. And that’s where humans could come in. With bigger brains, better vision, and weapons humans could have helped wolves finish the job. Working together, a meal was won and shared using the strengths of both predators.

Another scientist, Pat Shipman, an anthropologist, also theorizes that early humans partnered with wolves. But in her book, The Invaders: How Humans and Their Dogs Drove Neanderthals to Extinction, she adds a twist: that alliance gave our ancestors an unbeatable advantage over Neanderthals, our competitor.

The wolf-dogs we partnered with were not the same as modern wolves or modern dogs, says Shipman. They were not a wolf-dog hybrid. But they had characteristics similar to those of today’s wolves. They would have tracked animals like elk and bison and hounded them until they tired. Then early humans would have stepped in to kill the prey with spears or bows and arrows. The wolf-dogs would have kept competitors and scavengers from stealing the kill—just as wolves protect their kills today. The partners shared the work and the meal.


While Shipman sees early humans partnering with wolf-dogs, Mark Derr in his book, How the Dog Became the Dog, describes how humans partnered with actual wolves. Derr’s view of our connecting with wolves is quite unlike the more commonly told story that wolves were curs slinking around the edge of early human settlements begging for handouts and eventually tamed by intelligent humans.

Our partnership with wolves, says Derr, occurred even before early humans had settlements. Certain nomadic humans and wolves met on the trail and were simply right for one another; were both sociable and curious. Those initial connections were no small thing. The first wolves to take up with humans were exceptional animals capable of making what Derr calls “a leap of friendship” with a creature from another species.


Once that leap was made, early human and wolves evolved together, and our ancestors learned from wolves. Over centuries, humans eventually domesticated some wolves into dogs, animals that have helped us survive and prosper.

Derr’s image of two intelligent and resourceful creatures meeting on the trail, befriending one another, and evolving together is an important addition to wolf natural history. And I believe that how we view wolves historically is critical to how we treat them today.

Consider this scenario: You’re in the market for a dog and you go to a reputable breeder. She has two dogs from which you can choose. The dogs look similar, and you ask about each. She points to one and says, “Oh, his parents hung out by my trash pile. They were just scavengers.”  Then she points at the other and says, “This one’s parents were two of my best friends. They were intelligent, attentive, and curious.”

Which animal would you take as one to love and care for? Which might you keep at a distance or demonize?

Instead of hating wolves and treating them as unacceptable competitors for game and livestock, we should thank these essential predators that befriended us, shared with us, and taught us.

Photo of black wolf by Bob Haarmans, CC by 2.0 Flickr

Posted by Rick Lamplugh at 6:53 AM