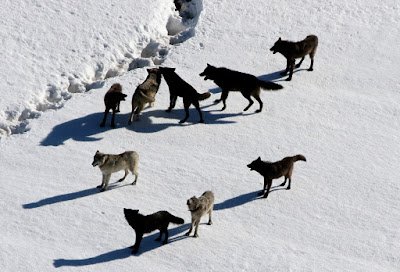 At the border of Yellowstone, sit two Montana wolf hunting units where park wolves can be and have been killed in legal wolf hunts. Montana Fish, Wildlife & Parks (MFWP) has recommended allowing two wolves to be taken in each unit. The Montana Fish and Wildlife Commission will vote on that recommendation, but first they want to hear what you think.

This is a contentious issue where I live in Gardiner, Montana, right beside those two units. Last night MFWP held a meeting to gather public comment in our town, and many locals said they want more wolves killed—up to six in each unit. If their opinion sways the commissioners, up to twelve wolves could die in those two units instead of the now recommended four.

I spoke with an MFWP staffer after the meeting and asked if they accepted input from people outside Montana. The staffer said they welcome it. They see visitors to Montana as important constituents.

If you live anywhere in the U.S., you can make your comment online and help save some wolves.

Please do so today. The Commissioners vote on January 24.

Here are some points you can make in your own words. Point 1 is the most important, but make as many as you want.

1. Thank Montana Fish, Wildlife & Parks for proposing a quota of 2 wolves in unit 316 and 2 in unit 313—the two units bordering Yellowstone. Urge the Commissioners to approve those quotas.

2. Remind the commissioners that having those quotas at 2 or less in each unit supports the ecotourism that Gardiner depends upon. This is especially true if you travel from elsewhere to see wolves in Yellowstone. The money you leave behind is essential to Gardiner’s economy.

3. Point out that protecting wolves in these two small units doesn’t restrict hunting wolves elsewhere. There are plenty of wolf-hunting opportunities nearby and throughout Montana. These two units and one outside of Glacier National Park are the only units in the state with limiting quotas.

4. Say there’s no economic reason to kill wolves just outside Yellowstone. They take few livestock, and ranchers can be reimbursed for confirmed or probable depredations.

5. Explain that wolves can actually help save elk and deer. Studies show that a higher density of predators like wolves and mountain lions can lower the rates of Chronic Wasting Disease in elk and deer.

Thanks for your help!

Photo of Yellowstone wolves by National Park Service
Posted by Rick Lamplugh at 10:04 AM