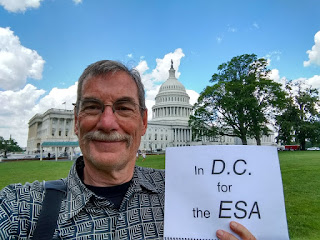 The ESA faces a fierce attack, but people are fighting back. The Endangered Species Coalition, a national coalition of hundreds of conservation-minded organizations, brought me and other advocates to D.C. to speak our hearts and minds to our elected officials. We were divided into teams. My team was guided around the capital by Kirin, a lobbyist from the Sierra Club, and her intern, Emma. We met with the staff of Jon Tester (D) and Steve Daines (R), Montana’s senators. We also met with the staff of California’s Nancy Pelosi, the House Minority Leader.

Tester and Pelosi support the ESA. Daines, on the other hand, supports the push to “modernize”  (that’s a euphemism for gutting) the Act. He’s not alone. Senator Barrasso (R-WY) is working on a bill to weaken the ESA and return more wildlife management power to state governments and the very same agencies that managed the wildlife onto the Endangered Species List in the first place.

Barrasso is wrong: the ESA doesn’t need to be modernized. The ESA needs to be fully funded.

Even after being shortchanged for decades, the ESA has managed to keep 99% of listed species from going extinct. That’s an incredible accomplishment, considering that right now there are more than 1500 listed species. Just imagine how many of those species could have reached full recovery if short-sighted politicians had funded the Act.

You can get in this fight. Please call your U.S. Senators and urge them to support the Endangered Species Act and vote AGAINST any efforts to weaken it.

Your two phone calls will take only a couple of minutes and will make a difference. As I have found by meeting with representatives in Helena and D.C., elected officials take note when constituents make the effort to speak to them.

Here’s a link where you can quickly find the phone number for your senators: https://www.senate.gov/senators/contact/

Thanks for helping the wildlife and wild lands we love!

To learn about the Endangered Species Coalition: http://www.endangered.org/
To learn more about the battle to gut the ESA: http://bit.ly/2umPpTp

Rick Lamplugh writes to protect wildlife and preserve wild lands. He lives near Yellowstone’s north gate and has just finished his new book, Deep into Yellowstone: A Year’s Immersion in Grandeur and Controversy. He is the author of the Amazon bestseller In the Temple of Wolves. Available as eBook or paperback at http://amzn.to/Jpea9Q. Or as a signed copy from Rick at http://bit.ly/1gYghB4.
Posted by Rick Lamplugh at 6:36 AM