Public Lands: A Blessing or a Curse?

In March, Mary and I left cold, snowy Montana hoping for warmth and sun in southern Utah. We weren’t disappointed. We hiked on lots of public land: a national conservation area, national monument, national parks, and state parks. We were stunned by the beauty of Utah’s deserts and mountains—and  we were thankful the wildlands had been protected from development.

But many Utahans rail against public lands. Some claim that locking away three-quarters of their state’s land stifles entrepreneurship and stunts economic growth. Is that true?

During our three weeks in Utah, we encountered many other visitors. Like us, they were spending on food, lodging, gas, and keepsakes. Obviously, tourism is alive and well. But what about Utah’s economy as a whole?

Once home, I studied the 2017 Economic Report to the Governor that the Utah Economic Council prepared. I found:

In another report, CNBC ranked Utah as the nation’s top state for business. The state’s economy ranked third in the nation. CNBC says the state has developed innovative industries and has a collection of big and small companies that rivals California’s Silicon Valley. The report identifies risks to Utah’s economy. Having too much public land is not among them. 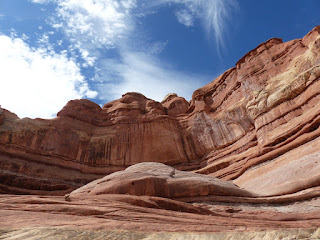 A prospering economy in a state with abundant public lands is not unique to Utah. The Atlas of Yellowstone reports that studies of the economic benefits of public lands found “…counties in the West with wilderness, national parks, national monuments, and other protected public lands…stimulate economic growth.” And what’s more, lands with greater protection have stronger positive effects on growth.

The people who complain the loudest about public lands are those who crave access for ranching, farming, forestry, wood products manufacturing, mining, and fossil fuel development. These industries have been around a long time and have lobbyists and political friends who make sure complaints about public lands are heard. They scream that these industries are staples of the West and the jobs they produce must be protected.

But they don’t admit that these extractive industries contribute fewer and fewer new jobs in the new West. The total number of jobs in these industries accounted for only three percent of all the jobs in the West, according to the Atlas of Yellowstone.

Far from making a case for selling off public lands, Utah provides economic and picturesque proof that public lands and a growing economy can exist side by side. Wildlands and the economic vitality they foster should be protected from those who want to privatize them and greedily tear them apart.

To enjoy a slideshow (photos and music) of the incredible Utah public lands we saw.

Rick Lamplugh writes to protect wildlife and preserve wildlands. He lives near Yellowstone’s north gate and is just finishing a new book about Yellowstone’s grandeur and controversy. He is the author of the Amazon bestseller In the Temple of Wolves. Available as eBook or paperback. Or as a signed copy from Rick.
Posted by Rick Lamplugh at 4:22 PM