The Heart of the Little Joe Fire

As wildfires rage across the West, I’m reminded of their frightening power and ecological necessity. Last summer Mary and I had the chance to hike into and explore the site of a Yellowstone wildfire. We saw the destruction and creation wildfire brings.

Crossing the Gallatin National Forest boundary, Rich, Mary, and I start our hike into the heart of where the Little Joe Fire once burned. But hike is the wrong word. We have to climb over, squeeze under, and tightrope walk across fallen snags. We weave through standing snags and push past new-growth pines. Sometimes the stark contrast of death and life—scorched black trunks and bright green new growth—stops me in my tracks.

We struggle to follow a trail that has not seen much use in the years since the Little Joe Fire. Eventually, we escape the maze and reach an overlook with grand views of Emigrant Peak;  Ash, Sheep, and Dome Mountains; the town of Gardiner; and a glimpse of Paradise Valley.

We can also see the gravel road near Beattie Gulch where at 5:30 this morning we parked our cars, prepared our mountain bikes, and stood in silent admiration of the bugling of elk. As we started cycling up that gravel road, we spotted a group of about 25 elk and calves grazing a quarter-mile away. Several females held their heads high and monitored our approach. As we rode toward them, the elk hustled over a ridge and out of sight. We cycled on, heading for the Northeast Electric Peak Trail. 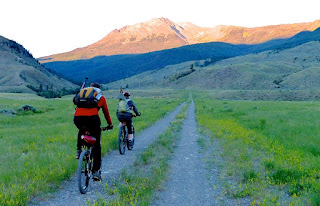 Yesterday, moving a fingertip along a map, our route had looked simple enough. We would cycle up the gravel road to a point where it has been abandoned and left to degrade to a trail. After about four miles of cycling up the flank of a mountain, we would ditch our bikes and continue on foot, maybe as far as the summit of Electric Peak.

But this morning, when we had to dismount and push our bikes up the steepening grade, I was reminded of the reality of landscape versus maps. My hiking boots brushed sage and rustled up its invigorating aroma. We passed an overgrown road on the left, and Rich surprised Mary and I when he said that the road leads to a cabin once owned by millionaire Malcolm Forbes.

Once the grade lessened, we remounted the bikes and slogged through switchbacks. We passed a pile of fresh bear scat and then another. I fingered my bear spray. As the grade increased we rode less, pushed more. Panting and wiping away sweat, I was reminded that there’s nothing like a mountain to teach humility.

After we lifted the bikes over yet another downed tree that blocked the rugged road, we had had enough “cycling.” We laid our bikes in the downfall that covered the road and proceeded on foot. About a mile or so later, Rich admitted that the trail did not look familiar. He had taken this route twice before, but the last time was more than a decade ago. We unfolded the map and located the abandoned road and what we hoped was our location. Semi-satisfied, we continued hiking and soon spotted the roof of a cabin on a slope above us. Rich did not recall that cabin, which could be recent construction in this patchwork of public and private land. Finally, we arrived where the road ended and a rusty sign proclaimed that we would enter Gallatin National Forest again. The slope we faced was cluttered with downed timber, blackened snags, and young pines. Rich smiled and said the trail to the summit of Electric Peak should be just ahead.

That trail might reach the peak, but we would not. As it turned out, we had found the day’s destination, the site of the Little Joe Fire, a little known but exceptional fire from years ago. This recovering burn invited us to stay and learn about fires and their aftermath.

On August 25, Christopher Kelley and some friends were enjoying a hot Saturday afternoon when they spotted a smoke column near Little Joe Lake. The fifth major blaze of Yellowstone’s 2001 fire season had sparked to life.

Officials jumped into action and determined that the fire threatened the Forbes cabin as well as a microwave tower. The incident commander told the Bozeman Daily Chronicle that they would fight to save the structures and suppress the fire in the mix of private land and National Forest on Yellowstone’s northern border.

The call went out for help. Eleven aircraft, a 20-person hotshot crew, and fire engines from the small towns of Gardiner, Livingston, Amsterdam and Wilsall came running. Slurry-dispensing planes dive bombed flames which now engulfed the crown of a dense conifer forest. The planes also dumped retardant on the Forbes cabin; it survived the dump and would survive the fire.

But along with the firefighters came high winds that fanned the flames. The blaze headed south, spread to more than 150 acres, jumped the boundary into Yellowstone, and consumed the recently evacuated Deaf Jim Patrol cabin just off the Northeast Electric Peak Trail.

Within two days more than 300 firefighters and support personnel were battling what had been christened The Little Joe Fire. Its billowing smoke was easily seen by tourists entering Yellowstone through the Roosevelt Arch. One hundred and forty firefighters, three bulldozers, and an armada of helicopters and tanker planes did their best, but the fire quadrupled to 650 acres, making Little Joe exceptional. According to NPS data, only about one in every twelve Yellowstone fires ever burns more than 100 acres. Most park fires never exceed a quarter-acre.

Investigators searching for the cause of the fire found a burned-up pickup truck near Little Joe Lake, where they think the fire started. They figured the fire had been human caused, which also makes Little Joe exceptional; lightning starts most Yellowstone fires, as it does elsewhere in the American West.

By September 3, nine days after Kelley and his friends spotted the smoke column, fire managers told the Associated Press that they had the fire under control. Little Joe had scorched more than 800 acres.

We start bushwhacking into the heart of Little Joe, climbing over, squeezing under, and tightrope walking across fallen snags. We pass occasional signs that identify the border of Yellowstone National Park, signs that Little Joe ignored. 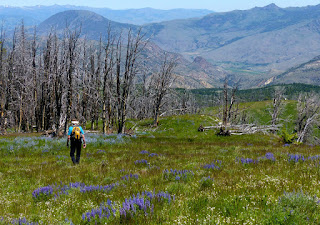 We climb to 8,600 feet and find a natural meadow painted with sunshine and decorated with wildflowers. We stop to explore and appreciate nature’s collage, especially the broad swaths of blue forget-me-nots. There is no evidence of the fire.

Leaving the meadow, we enter an obvious burn area. What was once a shaded forest floor is now a sun-drenched paradise that attracts the meadow’s wildflowers. But everywhere we look, we find new tree growth. There are probably more trees growing here now than before Little Joe blazed through. Research after the big fires of 1988 found that where Yellowstone’s dominant tree, lodgepole pines, burned, 50,000 to 1,000,000 seeds covered each acre of blackened ground. Those seeds had been enclosed in cones that are sealed with resin that requires fire’s intense heat to melt. Having released the seeds, fire helps them grow by clearing the forest floor and opening the canopy. Eventually, the lodgepole pines will reclaim the sunlight, darken the ground below them, and send the wildflowers back to the meadow.

Lodgepole pine is just one of the many plants and animals in Yellowstone that survive and even flourish with fire. All have had a long time to adapt; wildfires have shaped Yellowstone’s landscape since the last glaciers melted away about 15,000 years ago. Without those fires that create a mosaic of plant communities in different growth stages, this ecosystem’s biodiversity and health would suffer.

Yellowstone’s Fire Management Plan aims to continue fire’s important role by allowing natural wildfires to burn with a minimum of human influence. On the other hand, the park is required to protect human life and the tiny percentage of Yellowstone’s 2.2 million acres that are developed. 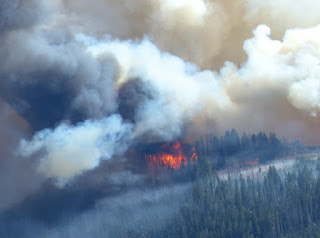 No doubt officials will have the chance to balance those conflicting demands as August temperatures increase, rainfall decreases, vegetation dries, lightning strikes, and wind blows. Smoke will darken the sky, flames will light the night, and people will worry that they are losing the Yellowstone they know and love.

But as the National Park Service reminds us, Yellowstone is not a museum—it is a functioning ecosystem in which fire plays an important role. A role that’s obvious as we crawl and clamber through the heart of Little Joe.

To view a short slideshow with music of the birth of a wildfire.