Dispersal is a fact of wolf life; wolves naturally leave their families, seeking a mate, open territory, or both. The Center for Biological Diversity (CBD) in their report, “Making Room for Wolf Recovery,” documented 56 instances over 33 years where wolves dispersed from recovery areas to new states. The average disperser walks, trots, or runs 264 miles.

But a wolf dispersing to a state where it is not protected by the federal Endangered Species Act (ESA) runs the risk of death. While that Oregon female, for example, reached California, other Oregon wolves have not been so lucky. Another female from the Imnaha pack dispersed only to be killed by an Idaho trapper. OR-9 and OR-16 also died in Idaho—from gunshots. OR-18 ran that Idaho gauntlet only to walk into the gunsights of a Montana poacher. Those wolves could have survived if the ESA still protected them in Idaho and Montana. New families could have formed.

The passage of the 1973 ESA enabled wolves—one by one and year by year—to reclaim a smidgen of the territory we had stolen from them with guns, traps, poison, and fire. Just 13 years before the ESA passed, the only wolf country left in the Lower 48 was Minnesota with 500 or so survivors hiding in the woods. But with federal protection some dispersed eastward to northern Wisconsin. Then Wisconsin wolves drifted further east to Michigan’s Upper Peninsula, mingling there with wolves from Ontario. Twenty-five years after the ESA, descendants of wolves reintroduced into Yellowstone and Idaho began dispersing into Montana, as did others from Canada. Some of Idaho’s wolves swam the Snake River and adopted Oregon. British Columbia wolves slipped across the border into Washington. That Oregon female dispersed to California.

This dispersal of wolves to a few states is one of the reasons given by the U.S. Fish and Wildlife Service (FWS) for proposing to remove gray wolves from the endangered species list. A government-selected panel of scientists rejected the FWS delisting plan, concluding that it did not follow the best science. But the agency continues to push for delisting, snubbing the rigors of science in favor of the smell of success. FWS Director Dan Ashe has been quoted by the Endangered Species Coalition as saying, "By the time the curtain closes on the Obama administration, we are on track to have delisted more species due to recovery than all previous administrations combined.”

While that record may please Ashe and Obama, delisting is simply and sadly a death sentence for wolves. As the CBD report states, “Where wolves have already been taken off the endangered species list in the northern Rockies and upper Midwest, state-authorized hunting, trapping and snaring, along with federal aerial gunning, are driving wolf numbers downward.”

That risk of decline for delisted wolves is so severe that five conservation organizations recently filed a lawsuit to force FWS to continue monitoring the health of wolf populations in the northern Rocky Mountains. In their press release, Western Watersheds Project, Friends of the Clearwater, Center for Biological Diversity, Cascadia Wildlands, and WildWest Institute stated: “A study in the journal Science, released in December 2015, found the Fish and Wildlife Service and states of Montana and Idaho have underestimated the impacts and risks of aggressive hunting policies for gray wolves instituted since protections were lifted. Hunters and trappers have killed more than 2,300 wolves in the two states since federal safeguards were first stripped in 2009.”

Meanwhile, there’s plenty of political pressure to delist. In November 2015, two U.S. senators (Republicans from Wyoming and Wisconsin) vowed to strip federal protection from gray wolves in Wyoming and the Great Lakes states—and to prohibit courts from intervening in those states on the embattled predator's behalf.

In February of this year, in a partisan vote, the U.S. House of Representatives passed the so-called “Sportsmen’s Heritage and Recreational Enhancement Act” that would end federal protection for gray wolves in Wyoming and the western Great Lakes. It also bars citizens from going to court to challenge these delistings. The bill must now be voted upon in the Senate.

These politicians want to remove more wolves from ESA protection, leave them at the mercy of the states, and—most frighteningly—circumvent our constitutional system of checks and balances. They want their special-interest-driven political decisions to be immune to court challenges where science and reason might prevail.

Stripping wolves of ESA protection is not necessary or justifiable. Wolves are still endangered, and there is plenty of unclaimed suitable habitat which dispersers could claim with protection. “Making Room for Wolf Recovery” estimates that wolves occupy only about a third of all possible suitable habitat. The report calculates that the current population of wolves in the Lower 48 “could be nearly doubled if federal protections were retained and recovery efforts began to restore wolves to some of the places they once called home.”

To make this point graphically, the report analyzed 27 studies and produced this map showing the historic habitat (gray), current  habitat (light green), and potential habitat (dark green) for gray wolves. The map reveals that some of the current wolf states—Montana, Idaho, Wyoming, Washington, and Oregon—still have territory for dispersers to claim.

Other sources support this notion:

There is also plenty of suitable habitat for dispersers that leave wolf states in favor of unoccupied states. Wolves could disperse from Canada, into Maine, New Hampshire, Vermont, and New York. Dispersers from Idaho and Wyoming could reach Colorado, Utah, and Nevada. Wolves from Canada, Minnesota, and Montana could disperse to North Dakota and South Dakota.

However, recent news reports reveal that these dispersers face serious challenges. In January, the Colorado Parks and Wildlife Commission approved a resolution opposing wolf reintroduction in the state, including reintroduction of the Mexican gray wolf, the most endangered gray wolf in the world. Wolves dispersing to Colorado will find themselves in a state where officials do not welcome them, though many citizens do.

Another news report describes how two wolves reached Iowa after dispersing from the Great Lakes area, only to be killed by hunters in December of 2015. The hunters claimed that they thought they were shooting coyotes. The Iowa Department of Natural Resources said the hunters will not be charged for killing two animals protected under the ESA. Such a state decision does not bode well for the protection of other dispersers.

Even if wolves somehow beat all the odds, fill all the suitable habitat, and double their population to 10,000 in the Lower 48, that number is nothing compared to the one to two million wolves that roamed North America when colonists arrived.

Numbers such as these matter when debating whether wolves should continue to be protected under the ESA. To qualify for protection, wolves only have to be at risk of extinction in a significant portion of their range. Given that wolves now occupy less than 10% of their historic range, there is at least 90% where they are extinct or close to it. That’s significant.

Wolves are by no means out of danger of being endangered. Restoring wolves to additional habitat would create more opportunities for dispersers to find mates when instinct drives them to disperse. Unfortunately, some states are just as driven to kill wolves, have proven they are ready, willing, and able to do so once federal protection is removed.

It’s up to the Obama administration and the U.S. Fish and Wildlife Service to believe the science, doubt the anti-wolf lobby, continue federal protection of wolves under the Endangered Species Act, and give dispersing wolves the chance to colonize states where their ancestors once lived.

Part Six of this series will look at a national wolf recovery plan.

To read the Center for Biological Diversity report: http://bit.ly/1zqPoe5 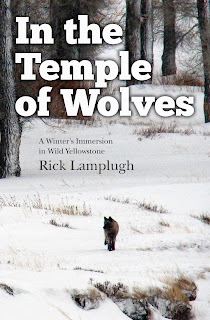 To order a signed paperback
from Rick

Posted by Rick Lamplugh at 7:07 AM