The Value of a Wolf's Life Hits Rock Bottom

Whitman County prosecutor Denis Tracy has driven the value of a wolf’s life to a new low in sentencing a farmer that intentionally killed a wolf protected under Washington’s endangered species rule. Jonathan Rasmussen will not face prosecution if he pays just $100 and commits no further game violations for the next six months.


Though the crime could have cost Rasmussen up to a year in jail and a $5,000 fine, Tracy said that he chose a fine based on the administrative costs of handling the case. In other words, the killer will just pay for Tracy’s time, not for killing a wolf.

Tracy told a reporter, “I thought about this case and how to resolve it for quite some time.” Some time indeed. Rasmussen shot the male wolf on October 12, 2014, and then called 911 to report his crime. According to the Center for Biological Diversity, the wolf did not die immediately from Rasmussen’s two bullets; he suffered until government agents arrived and put him out of his misery. Now, more than eleven months later, Tracy slaps the farmer’s wrist.

Tracy says he spent a lot of time thinking about the case. I doubt it. Consider this: a service technician who came to our house to fix a gas stove charged $95 per hour. As he left, he handed us a bill for $145. If the administrative cost for Rasmussen’s case was only $100, Tracy—who must charge at least as much as a service technician—couldn’t have done much more than decide last October to let Rasmussen off. And to wait a long time before doing so.

Rasmussen’s legal fate was left up to county prosecutor Tracy because wolves in eastern Washington are no longer protected under the federal Endangered Species Act. I wonder what the punishment would have been under federal law? Poaching a federal endangered species can cost you up to a year in jail and a $100,000 fine.

Of course, the feds have often been timid about taking legal action because of a little-known Department of Justice guideline referred to as the McKittrick Policy. That policy—named after the man convicted of killing one of the first wolves released into Yellowstone National Park—directs federal attorneys to take no action unless they can prove that the person knowingly killed a protected species.

Federal prosecutors would have had no problem proving that Rasmussen knew what he was doing. The wolf was walking through a field—the first wolf to do so in Whitman County in almost 100 years. When Rasmussen saw the animal, he did not feel threatened for his life or that of his family. He did not see the wolf threatening his livestock. He said that he killed the wolf because it might—in the future—kill some livestock. He had plenty of time to reconsider this preemptive strike while chasing the animal for several miles with his truck.

A featherweight fine for this brutal and calculated killing of an endangered species screams that wolves don’t matter, that even though they are endangered there are no real consequences for killing them. This travesty exemplifies why wolves need protection under the federal Endangered Species Act. But that’s not all they need. Wolves also need a national wolf recovery plan that delineates how the federal government will assist wolves in returning to most of their former range.

Existing state wolf management plans should not be confused with a hoped-for national wolf recovery plan. State plans are more about limiting wolf numbers than they are about helping wolves recover to most of their range. State plans make deadly statements about the value of wolves. Some plans, for example, define protecting wolves as keeping a certain number of wolves alive, while surplus wolves can be legally killed. Those plans endanger wolf recovery in two ways. First, the animals die in legal hunts. Second, government-sanctioned killing influences the intention to poach. If the government says it’s acceptable to hunt wolves, then citizens—like Rasmussen—figure it’s also acceptable to poach them.

This has happened elsewhere. In Wisconsin, the state killed wolves implicated in livestock attacks, believing that taking out “bad wolves” would foster greater tolerance for wolves in general. But a study found just the opposite: Wisconsin residents who lived in wolf areas showed a decline in tolerance and an increase in intention to poach wolves. Tolerance fell even further after the state’s first legal wolf hunt.

Our federal government should write policy, enact legislation, and create a national wolf recovery plan that sends the message that wolves matter, that killing wolves should be the last resort, not the first. Such a message might have stopped Rasmussen from pulling the trigger.

Through a national wolf recovery plan, our government should develop and implement a nationwide curriculum to teach how little risk wolves present and how much ecological benefit they provide. Perhaps if Rasmussen understood the real benefits of wolves and not just his perceived risks, the wolf he killed could be helping the Washington ecosystem today.

Rasmussen and county prosecutor Tracy show why states can't be entrusted with the fate of wolves. Wolves everywhere should be covered by the federal Endangered Species Act until the species has recovered under a national wolf recovery plan. Keeping the ESA intact—which is not at all guaranteed—and adding a national wolf recovery plan are the only ways to protect wolves.

To Learn More:
How the ESA faces extinction
A national wolf recovery plan
Creating a culture of wolf respect 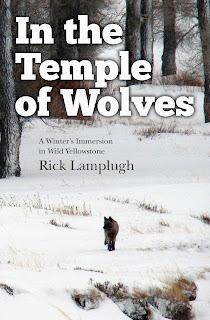 Rick Lamplugh's
In the Temple of Wolves


To order a signed paperback
from Rick

What Readers Say: “The detail, the emotion, the "put you in his shoes" kind of story will keep you reading right through the night. Don't start reading in the evening if you have to get up early!” By Patricia K
Posted by Rick Lamplugh at 6:50 AM