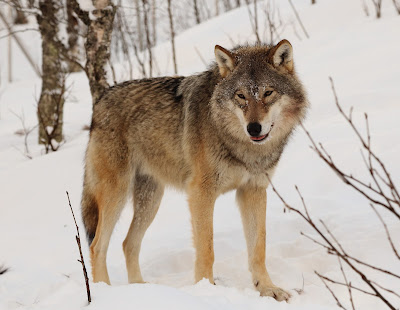 On December 19, 2011 a two-and-one-half-year-old wolf known as Slavc (pronounced: slouts) left his birth pack in the southwestern corner of Slovenia. Slavc, at 88 pounds, was average size, perhaps similar to the Eurasian wolf pictured above. But he would prove to be well above average in his determination and ability to meet the challenges of a 1,200-mile, biologically driven journey in search of a mate.

Slavc's incredible journey offers more than a compelling story. His journey shows how protected traveling wolves not only find mates, they also increase the genetic health of the species. This is another solid science-based reason for federal protection of wolves.

Slavc's journey was tracked by data from the collar he had been fitted with a few months before his departure. That collar sent data points multiple times a day, making his route a connect-the-dots drawing on the computer screen of Hubert Potocnik, the biologist and researcher who had collared Slavc.

The challenges of Slavc’s journey started on day one, when he bumped into the A1, a fenced, four-lane expressway. As Potocnik told a reporter for The Guardian, the wolf could only cross the highway by underpass, overpass, or along a river. Slavc chose the overpass and kept moving.

A short time later he used a 492-foot long bridge to cross another wide and busy highway, the H4.  As with other wolves whose journeys I’ve followed, major highways may slow but won’t necessarily stop determined dispersers. That drive to find a mate is powerful.

Slavc moved mostly at night and found plenty of fuel for his journey. Slovenia has ample red deer, roe deer, and wild boar, prey that makes up about 90% of a typical Slovenian wolf’s diet, according to researcher Miha Krofel. But again Slavc proved to be anything but typical. The GPS dots showed that he stopped near the Ljubljana airport for three days. Further investigation disclosed that while there he caught and consumed two foxes. Fed and rested, he continued his journey north toward points unknown.

Slavc’s journey was relatively safe from human-caused mortality because wolves were federally protected in Slovenia. Protecting wolves had proven necessary in Slovenia as in other European countries. In fact, hunting nearly eradicated wolves in Western Europe in the 19th and 20th century.

In Slovenia, the wolf population was almost killed off by the early 20th century. As the population declined, wolves retreated to the most remote parts of the Dinaric Mountains in the southwestern corner of the country, an area that would become the home territory of Slavc’s birth pack. In 1993 Slovenia declared wolves an endangered species and afforded them the protection that helped keep Slavc from being killed by anti-wolf ranchers and hunters.

Slavc crossed Slovenia from south to north in just ten days, somehow making his way safely through the network of highways pictured on the map above. He then entered Austria where he intersected the Drava River. Though there was no bridge or overpass, he didn’t stop. When Potocnik’s GPS dots appeared on one bank and then on the other, he decided that Slavc had swum the 900-foot wide river. In December. I can picture Slavc standing on the bank, his legs spread as he shakes the river water off, gazes around, howls, listens, and hearing no reply continues his journey.

Slavc’s was protected on his Austrian journey as well. In Austria, wolves had once been feared, hated, and hunted because of livestock conflicts, competition for wild game, and threat to humans. By the middle of the 19th century, according to the website LIFE WolfAlps EU, Austria’s resident wolf population had been killed off. Beginning in 2009, traveling wolves like Slavc that showed up in Austria were protected—mainly from anti-wolf sheep keepers and hunters—under an European Union directive.

With the crossing of the Drava River behind him, Slavc headed to the Austrian Alps to try his paw at crossing mountain ranges. In early January in extreme alpine conditions. I can imagine him trudging and leaping through snow that had accumulated up to 19 feet deep. He turned westward, passed a ski area, and made snowy tracks toward Italy. After climbing an 8,530-foot high pass, he ate a roe deer calf to recharge.

By late January, he was deep in the Italian Alps, heading south, and skirting ski areas. By mid February, two months into his journey, Slavc had passed the last ski area and exited the Italian Alps. On Potocnik’s computer screen, the connect-the-dots line pointed toward Italy’s mountainous Lessinia Regional Park. When news of Slavc’s location got out, one of Potocnik’s colleagues sent him a video of wolves—including a female—in Lessinia Park. The biologists joked with each other that Slavc would surely find his female there.

But Slavc didn’t consult with the biologists and he wasn’t ready to stop. He passed the park and continued south. By March of 2012—after three months of crossing busy highways, a wide river, and wintery mountains—he reached the sunny countryside of Italy’s Valpolicella vineyard region. In doing so, he became the first wild wolf in that area in more than 130 years.

While wolves had once been widespread in Italy, by early in the 20th century they were extirpated in the Italian Alps, the area Slavc had just passed through. In 1971 wolves received their first protection in Italy and Slavc enjoyed that protection—especially from anti-wolf livestock breeders—as he searched for a mate.

In Valpolicella, Slavc discovered he wasn’t alone. He somehow discovered a private animal park that contained three captive wolves, one a female. Perhaps hoping to connect, he remained in the area for twelve days. To survive, he killed his first livestock, two sheep and a goat, thus creating another first for the area.

I imagine Slavc howling again and again toward the captive wolves. And while they may have howled back, they could not reach him. Driven by biology, he continued his compelling search for a mate. He headed back north for thirty some miles and this time he entered Lessinia Regional Park, an area about the size of Yellowstone’s Lamar Valley. A mountainous section is pictured below.

Back at his desk, Potocnik asked a Lessinia Park manager to search for Slavc’s tracks in the park. She discovered two sets, one set smaller than the other. After an incredible 1200-mile journey, Slavc had found a female, later established to be from the Apennine Mountains in southern Italy. As determined as Slavc, this female had travelled about the same distance as he had to reach Lessinia and find him. The media named her Juliet because she was now near Verona, a city made famous by Shakespeare’s Romeo and Juliet.

Juliet and Slavc created the first pairing of wolves in the Eastern Alps, according to a Lessinia Park press release. And the firsts kept coming. In 2013 they produced the first pups—a litter of at least two—born in that region in many years. Their pups represented the first mixing of the DNA of two distinct wolf populations: Slavc’s DNA from Slovenia’s Dinaric-Balkan region and Juliet’s DNA from Italy’s Apennine region.

That Slavc and Juliet were able to find each other and create a pack was possible in part because of the country-wide protection afforded dispersing wolves in Slovenia, Austria, and Italy. They had seven more pups in 2014 and another seven in 2015, helping to increase the size and genetic health of Italy’s wolf population. And the genetic benefits of their coupling continues.

A son of Slavc and Juliet dispersed back to Slovenia in 2018, according to the European Wilderness Society. The son paired with a female from unknown origins and by 2019 the two had mated and reproduced. So began the creation of another new mix of DNA and another new wolf pack, this one living in a forested plateau on the edge of Triglav National Park, Slovenia’s only national park, in the northwest corner of the country, far from where Slavc had begun his incredible journey years earlier.

Scientific research as well as the remarkable story of Slavc and Juliet and their offspring shows that when wolves are protected and allowed to safely disperse, they can increase the breadth of wolf country and the size and genetic health of wolf population. This is science that should not be ignored in the US or wherever wolves are found.

JOIN Rick in his latest writing adventure, Love the Wild, a free weekly letter to subscribers. You’ll enjoy a diverse selection of podcasts, photo essays, opinion pieces, excerpts from Rick's award-winning books, and more. All aim to excite your mind and warm your heart with stories about wildlife and wild lands.

Rick's bestselling In the Temple of Wolves; its sequel, Deep into Yellowstone; and its prequel, The Wilds of Aging are available signed. His books are also available unsigned or as eBook or audiobook on Amazon.

Posted by Rick Lamplugh at 8:50 AM