We Must Monitor Montana's Wolf Hunting 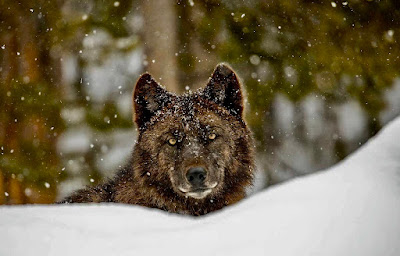 The U.S. Fish and Wildlife Service announced in September that wolves in the West may need a return to protection under the Endangered Species Act. Their decision comes in response to petitions from two coalitions of conservation organizations.

While agreeing to begin a twelve-month study of the need for protection, the agency declined to immediately restore protection for western wolves on an emergency basis; wolf hunting continues.

Numerous Tribal nations have also called for emergency relisting of gray wolves and for the Biden administration to honor treaty obligations that require consultation with the Tribes on gray wolf management.

The USFWS stated that protecting wolves in the northern Rockies or across the western United States may be warranted now because new laws in Idaho and Montana promote such widespread killing of wolves.

So, sadly, the number of wolves killed during the current wolf hunting season in Montana and Idaho is a key factor in whether the USFWS decides to return surviving wolves to protection of the ESA.

Even though watching the number of wolves taken is painful, it's essential to stay informed. I will regularly post data from Montana Fish, Wildlife & Parks (FWP) on wolf kills in each of the Montana's wolf management units during the six months of hunting and trapping. (See table below.)

The Danger to Yellowstone and Glacier Wolves

Park wolves following elk and other food out of Yellowstone National Park can be shot once they step into units 310, 313, and 316. For over a decade Montana limited the number of wolves that could be taken in 313 and 316. Last year that quota was one wolf in each of the units. New rules abolished those quotas and so far SIX wolves have been killed in 313 and 316.

Park wolves stepping out of Glacier National Park can be shot in units 110 and 130.

Remember that most of these wolves were born and raised in parks where hunting is not allowed and humans do not represent danger. This makes them an easy target.

So far Yellowstone has reported three park wolves killed north of the park in unit 313. These are two female pups and a female yearling from the Junction Butte Pack.

In a news release, Yellowstone Park Superintendent Cam Sholly stated, “Yellowstone plays a vital role in Montana’s wildlife conservation efforts and its economy. These wolves are part of our balanced ecosystem here and represent one of the special parts of the park that draw visitors from around the globe. We will continue to work with the state of Montana to make the case for reinstating quotas that would protect the core wolf population in Yellowstone as well as Montana’s direct economic interests derived from the hundreds of millions spent by park visitors each year.”

The release adds: "Visitor spending within communities that are 50 miles from Yellowstone exceeds $500 million per year, tens of millions of which is spent by visitors coming to watch wolves and supporting Montana businesses in gateway communities." 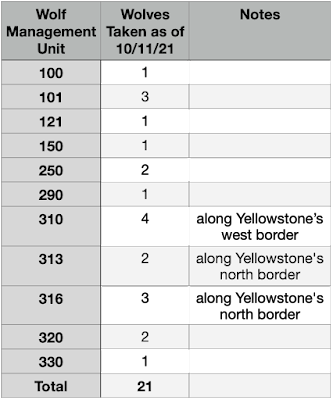 Important information on the hunting and trapping season:

TrappingSeason dates for trapping wolves will be the first Monday after Thanksgiving to March 15 for the entire state. For those districts located in the federally designated Grizzly Bear Recovery Zone, Montana FWP will apply a floating open season date that could start the Monday after Thanksgiving (November 29, 2021), or any day thereafter as determined by the department based upon a real time reading of conditions. If the department does not select a date prior to December 15, then the season will open on December 15 and close on March 15.

Hunters and trappers must call in their wolf harvest within 24 hours. If the hide and skull are retained, they must be brought in for inspection and pelt tagging at an FWP office within 10 days.

For more information on hunting regulations

To report a dead wolf or possible illegal activity:

Rick Lamplugh writes to protect wildlife and preserve wild lands. His award-winning books, In the Temple of Wolves; its sequel, Deep into Yellowstone; and its prequel, The Wilds of Aging are available signed. His books are also available unsigned or as eBook or audiobook on Amazon. 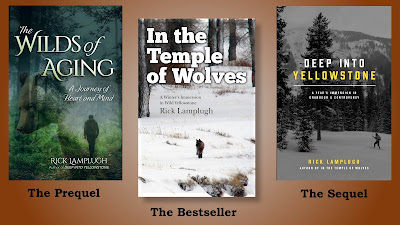 JOIN Rick in his latest writing adventure, Love the Wild, a free weekly letter to subscribers. You’ll enjoy a diverse selection of podcasts, photo essays, opinion pieces, excerpts from Rick's award-winning books, and more. All aim to excite your mind and warm your heart with stories about wildlife and wild lands.

Posted by Rick Lamplugh at 5:40 PM