A Briefing: What Idaho, Montana, and Wyoming Tell Us About Unprotected Wolves 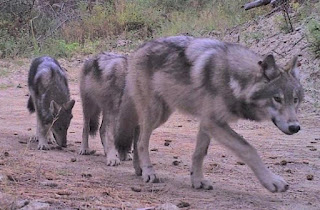 Wolves in Idaho, Montana, and Wyoming lost federal Endangered Species Act protection years ago. Since then, wolves have been managed by each state’s fish and wildlife department and by legislators passing wolf management bills. In each of these states “management” means “killing.”

Under federal law, each state must have at least 150 wolves and 15 breeding pairs at the end of each year. Each state's management plan aims to keep its wolf population as small as possible but above that required minimum. The methods these states have devised over the years to manage by killing paints a chilling picture of the future for wolves in states where they were recently delisted from ESA protection by the US Fish and Wildlife Service.

Idaho wolves were delisted from ESA protection in May 2011—but not by the US Fish and Wildlife Service (USFWS). Instead, the US Congress attached a rider attached to a must-pass federal budget bill. For the next five years, the USFWS monitored Idaho’s wolf management. Once that monitoring ended, Idaho became very tightfisted with information about its wolves and their welfare. That approach is exemplified by the fact that the most recent annual wolf report published by Idaho Department of Fish and Game (IDFG) covers 2016 and half of 2017.

That 2017 report documents that 226 wolves were killed by hunters and trappers. Another 70 wolves were killed as a result of 76 confirmed livestock losses. Twenty additional wolves were killed “to address wolf predation on elk,” a politically correct way for IDFG to reveal that a Wildlife Services sniper in a helicopter gunned down 20 wolves on National Forest land, some of the last land available to wolves. This controversial aerial slaughter was repeated in 2020 and 17 more wolves died. (Wildlife Services is a secretive—and out of control—federal agency that is funded partially with our tax dollars and kills millions of wild animals each year.)

In addition to sniping from helicopters, IDFG has managed wolves by expanding wolf hunting and trapping seasons and by legalizing the use of snares. A single hunter or trapper can now kill 15 wolves in a given year. Trappers can use both hunting and trapping tags to kill 30 wolves.

Idaho’s legislature has also been busy managing wolves. The legislature created the Idaho Wolf Depredation Control Board. That board is responsible for killing wolves that attack livestock and other wildlife. The board is funded to the tune of $400,000 per year by contributions from livestock producers, IDFG fees, and taxpayer dollars. 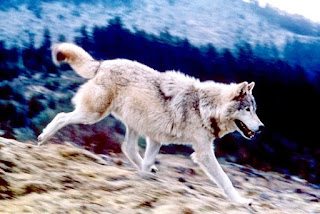 The legislature also passed a bounty bill that allows hunters and trappers to be reimbursed for expenses incurred while killing wolves. Reimbursement can reach $1,000 per wolf. The money to pay these bounties comes from hunters and trappers, fundraising, and donations from groups such as the Rocky Mountain Elk Foundation. The Idaho Fish and Game Commission even awarded a grant to help pay bounties.

In February of this year, legislation began moving through the Idaho House of Representatives that would allow the hunting of wolves using snowmobiles, ATVs, and even powered parachutes. Additionally, wolves would be reclassified as predators, instead of big game. The goal of this legislation is to reduce Idaho’s wolf population from 1,500 to 500.

In a September 2020 press release, the Center for Biological Diversity described how all this managing by killing has harmed Idaho wolves. According to an analysis of records obtained by Western Watersheds Project, hunters, trappers, and state and federal agencies killed about 400 wolves in Idaho each year for the last few years. But from July 1, 2019 to June 30, 2020 that kill number swelled to 570 wolves, including at least 35 pups, some likely only 4 to 6 weeks old.

IDFG monitors wolf populations each year to make sure the state has at least 15 wolf packs with breeding pairs, the number required to avoid having Idaho’s wolves relisted under the ESA.

In just a decade since delisting, Idaho has become the poster state for managing by killing.

Montana's wolves were delisted with Idaho’s in 2011. At the time of delisting, almost 1,000 wolves lived in Montana, according to Montana Fish, Wildlife, and Parks (FWP). For the next five years, USFWS monitored Montana’s wolf management. Now, after a decade of state management only 833 wolves survive in the state, according to FWP in their most recent (2019) wolf report. Wolves live in only about a third of their historic range as shown in the map below. 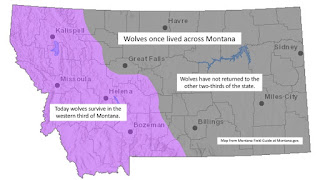 This year it has become painfully obvious that Montana wants to manage by killing, just as Idaho does. Montana now aims to kill as many wolves as possible while leaving the minimum required to avoid relisting under the ESA, at least 150 wolves and 15 breeding pairs.

To reach this goal, the current Montana legislature is pushing a number of bills. There’s one that aims to cut the wolf population by slaughtering hundreds of wolves in a variety of nasty ways, including baiting and even killing wolves at night using night vision scopes. There’s another bill that would allow the use of snares as well as traps. There’s a bill that would extend the wolf hunting season. There’s even a bounty bill—like Idaho’s—that would reimburse hunters and trappers for expenses incurred while killing wolves.

There is no science-based justification for this planned slaughter. There’s no evidence, for example, to support the claim by hunters that wolves have decimated big game such as elk. To the contrary, the most recent FWP Big Game Hunting Forecast states, “These are good times for elk hunters, as Montana elk populations continue to be strong across most of the state.”

There’s no evidence to support the claim by livestock producers that wolves are taking more livestock. In fact, the opposite is true. A close review of FWP annual wolf reports reveals that the number of livestock taken by wolves peaked at 309 in 2009. But over the last five years that predation number has fallen significantly and varied little with only 57 to 94 head of livestock taken annually. I say “only” because Montana has more than two and a half million head of livestock, and a loss of fewer than 100 per year represents a truly insignificant percentage of the state’s livestock.

There’s also no evidence to support the claim that Montana’s wolf population is out of control. Again, the opposite is true: FWP data shows that the wolf population has stabilized at around 825 for the last four years.

The only justification I can see for this explosion of management by killing is extreme hatred of wolves.

The delisting of Wyoming wolves from Endangered Species Act protection was a real ping pong match. Wolves were initially delisted in September 2012. But that delisting was successfully challenged and wolves came back under ESA protection two years later. After that return to protection was successfully challenged, wolves were again delisted in April 2017. Since that delisting, wolves in Wyoming have been managed by multiple agencies: the National Park Service in Yellowstone, a tribal agency on the Wind River Reservation, the US Fish and Wildlife Service on the National Elk Refuge, and the Wyoming Game and Fish Department (WGFD) in the rest of the state.

At least 311 wolves live in Wyoming according to WGFD’s most recent (2019) annual wolf report. Of that total, 94 live in Yellowstone, 16 live on the Wind River Reservation, and 201 live in the rest of the state.

In 2019, humans took the lives of 88 Wyoming wolves, including 30 killed as the result of wolves taking 70 livestock. 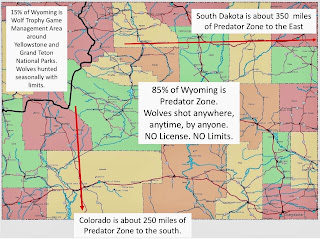 As in Idaho and Montana, Wyoming’s legislators have been busy with wolf management. The legislature passed a law that divides state controlled lands into two wolf management areas. This division, as shown on the map above, essentially created a wolf prison in the northwest corner of Wyoming on public lands that surround Yellowstone and Grand Teton National Parks. Wyoming calls this prison its Wolf Trophy Game Management Area. Hunters need a license and there are limits to how many wolves can be taken in the Trophy Area.

WGFD reports that at least 175 wolves roam within the Trophy Area most or all of the time. In 2019, WGFD implemented a wolf hunting season with the goal of keeping the Trophy Area’s wolf population at approximately 160 wolves. That, of course, is the magic number that will keep the state’s wolves from being relisted under the ESA.

When wolves leave that small prison where they can be hunted four months of the year, they enter the other 85% of the state where they are classified as vermin and can be shot on sight, anytime, anywhere, by anyone. No license needed. Wyoming calls this area surrounding the prison its Predator Zone.

This Wyoming wolf prison is, I believe, a primary reason that wolves have not been able to disperse naturally southward to Colorado and instead must be reintroduced into a state with good wolf prey and habitat.

To read the previous briefings:

Impact of Delisting on California, Oregon, and Washington Wolves

WHAT CAN YOU DO NOW TO HELP PROTECT WOLVES?

As shown by the management-by-killing approach in Idaho, Montana, and Wyoming wolves across the US will die without ESA protection. Hopefully, the courts will eventually roll back the recent delisting because of low wolf numbers, loss of wolf habitat, and lack of scientific rigor. But there is no guarantee.

We can ask the Biden administration to begin the process of restoring ESA protections for gray wolves. Here’s a link to the WildEarth Guardians page and a letter you should personalize before sending.

The Natural Resources Defense Council has also sued the USFWS over the delisting.

Thanks for taking action, and I’ll keep you updated as this battle progresses.

Wolf with pups via Idaho Fish and Game

Rick Lamplugh writes, photographs, and speaks to protect wildlife and wild lands.
His bestselling In the Temple of Wolves; its sequel, Deep into Yellowstone; and its prequel, The Wilds of Aging are available signed. His books are also available unsigned or as eBook or audiobook on Amazon.

Posted by Rick Lamplugh at 3:36 PM