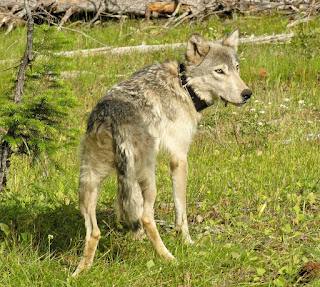 When wolves were reintroduced into Yellowstone in the mid-90s, they were expected to leave the park and repopulate other areas. And they did, traveling in many directions. Two wolves came together just north of the park in 2000 to form the Mill Creek Pack. In 2007 that pack had three adults and five pups. One of the pups was a female who, though she started life in Montana, would end her life—after an incredible journey—far from her birthplace and family.

The Mill Creek pack spent some time on private property on the east side of Paradise Valley where the Absaroka Mountains erupt from the valley floor. The pack, according to Montana Fish Wildlife and Parks (FWP) had taken two cattle. This led FWP to collar three of the pups in the fall of 2007. Once collared, this female pup became officially known as SW341F.

Responding to natural urges, 341F left her family in September of 2008 when she was seventeen months old and probably weighed less than 100 pounds. She began her journey by heading south toward Yellowstone. Her departure wasn’t unusual. Somewhere between one and three years of age, a wolf may leave its family to seek a mate and form its own pack. Dispersers, as these travelers are called, might cover thirty miles in a day. The collar 341F wore emitted GPS signals that would allow FWP to track every step of her incredible journey.

That track shows that she stayed at first in the rugged Absarokas, familiar territory and public land. She entered and soon exited Yellowstone. She kept walking, now in unfamiliar territory, toward Cody, Wyoming. She stayed in and near Shoshone National Forest. In the Northern Rocky Mountains, according to FWP, the average dispersal distance is about 60 miles. By this time 341F had already travelled farther than that, and she wasn’t done yet.

Face-to-Face with an Interstate

She reached the Wind River Range and climbed up and over. As winter closed in, she went as far south as Interstate 80, near Evanston, Wyoming. The GPS track tracing her journey stops right at the interstate. She decided—probably out of fear of the sight, sound, and smell of a wide, busy, high-speed road—not to cross the freeway. Instead she turned around and headed north.

Though repelled by I-80, she wasn’t ready to stop her journey. After trekking north, she turned west and then south. And ran into I-80. She again chose not to cross and instead did another about face.

Had she made this same journey just three years later, she would be in what Wyoming now calls their Predator Zone. She could be shot anytime, by anyone, for no reason, no license required. But during her incredible journey she was thankfully protected in every state by the federal Endangered Species Act.

This protected landscape was home to plenty of elk and deer. But she would not likely bring down an elk or deer by herself. More likely, she would hunt rabbits and ground squirrels, weasels and badgers, beavers and skunks. She could scavenge roadkill, winter kill, or the remains of livestock dumped in “bone yards” on ranches. Lone wolves even subsist on grasshoppers, according to a recent journal article. Whatever her menu, she found enough food to fuel her incredible journey as she searched for other wolves, howling occasionally and listening for a response.

A few days after turning away from I-80 for the second time she entered the southeastern corner of Idaho; but she didn’t stay long. Instead, she followed a natural wildlife corridor southward into yet more mountains, the Bear River Range. By late January of 2009, four months into her journey, she was trotting through these mountains toward Utah.

The Bear River Range empties into a valley cut by her nemesis, I-80. Somehow she finally overcame her urge to avoid the interstate and crossed the deadly strip of fencing, concrete, and vehicles. What a challenge that must have been.

Her Historic Entrance into Colorado

With the interstate disappearing behind her, she left the valley floor and entered the shelter of the Uinta Mountains. Day by day she moved eastward through public land. Then she passed by Vernal, Utah, crossed more major roads and, south of Dinosaur National Monument, entered Colorado.

341F was only the second confirmed wolf to reach Colorado since the Yellowstone reintroduction. In June 2004, another young, collared, female from Yellowstone had reached Colorado only to be killed by a vehicle on I-70 near Idaho Springs, just west of Denver. The state's last native wolf was killed in 1943.

By the time 341F reached Colorado she must have become proficient at knowing when, where, and how to cross life-threatening roads because she did just that as she continued deeper into the state. Eventually, above I-70, she turned north into the wildlife-rich Rocky Mountains. For reasons only she could know she chose a route that would take her back to Wyoming.

After passing by or through Rocky Mountain National Park and surrounding national forests, she reentered Wyoming, staying in national forest until she reached 1-80 yet again. This time she not only crossed it going north but a short while later reversed course and recrossed it going south, backtracking to Colorado. She had become a proficient traveller.

Once back in Colorado, she stayed on public land, heading south then west. In late March, she entered White River National Forest, the last public land that would shelter her. She was twenty-three months of age, old enough to breed. But there is no evidence she did so during the breeding season that had just ended. With luck she could find a mate, breed next year, and create a resident pack.

According to documents WildEarth Guardians obtained through a Freedom of Information Act (FOIA) request, one wildlife official wrote after studying data from her GPS collar:

“It doesn’t look good . . . I think she may be dead. She is ~6 miles north of Rio Blanco, Colorado… Her locations show that she has been in the same spot since noon on 3/31 and the locations are within 0.04 miles of the road on the north side. My fingers are crossed that she is feeding on roadkill but it just doesn’t seem likely since her locations are all extremely clustered and so close to the road.”

Wildlife officials found her body about twenty-four miles north of the town of Rifle, less than two miles west of Highway 13, and near Rio Blanco County Road 60. This county road curves through secluded hills and valleys that are covered with sagebrush and freckled with short conifers. Rural homesteads dot the area. For 341F, this landscape might have looked similar to her home turf in Paradise Valley.

By March the elk and deer in Rio Blanco would have come down from the high country and settled in to wait for spring in the bottom land, much of which is privately owned. 341F could have done the same in search of prey. This intersection of private and public land is a deadly conflict zone for wolves everywhere.

Findings of the Investigation

Since 341F was protected by the ESA, wildlife officials began investigating her death. It took years and that FOIA request for investigators to finally release information. And when they did, the findings were troubling.

341F was poisoned with Compound 1080. This poison, sodium monofluoroacetate, was banned by President Nixon in 1972. The Reagan administration in 1985 allowed the use of 1080 in collars that are placed around the neck of sheep or goats. When a predator attacked a collar-wearing animal, it could bite into the collar, ingest 1080, and die.

Death by 1080 isn’t pretty or quick. Symptoms, according to Predator Defense, begin to appear half an hour or more after exposure and may last for hours or days. The dying animal will go through cycles of vomiting, involuntary hyperextension of the limbs, convulsions, and collapse. Compound 1080 is so potent that animals scavenging months-old tainted carcasses can still succumb to secondary poisoning.

Predator Defense adds that despite the 1972 ban, stockpiles of the poison were never recalled or destroyed and are still used today to illegally kill wolves, coyotes, and eagles. The infamous Wildlife Services can legally use 1080 collars in Idaho, Montana, New Mexico, South Dakota, Texas, Utah, West Virginia, and Wyoming. But NOT in Colorado.

That 1080 was found to have poisoned 341F despite being banned for 37 years and illegal in Colorado raises many questions. How did the 1080 get where 341F might ingest it? Was someone illegally using 1080 to kill predators? Did someone set it out specifically to kill 341F after spotting her? Who was responsible for placing the poison?

Unfortunately, the investigation did not answer these questions. We don’t know exactly how 341F’s incredible journey ended. But there are lessons we can take from it.

Wolves can’t see borders on maps. They go where they go for their own reasons. Public lands and the Endangered Species Act are critical to the safe dispersal of wolves.

Interstates and busy highways did not stop 341F and won’t stop other determined wolves.

Colorado has territory that drew 341F not just once but twice. Such territory could sustain resident wolf packs.

Wolf in photo is Oregon wolf OR-2, a wolf similar in appearance to 341F. I found no photos of 341F in action.

Posted by Rick Lamplugh at 9:13 AM