You Just Can't Keep a Good Coyote Down 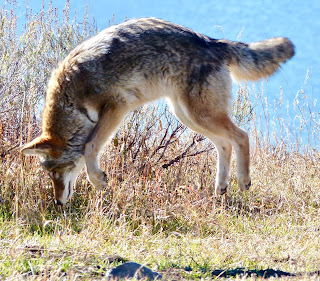 Yellowstone’s coyotes had no idea in 1995 who the new dog in the neighborhood was when wolves were reintroduced in the park. After a seventy-year absence, generations of coyotes had come and gone without a wolf in sight. But coyotes soon learned that these new neighbors sure could bring down elk. The reintroduced wolves, on the other hand, knew exactly who the coyotes were: competitors for hard-won food.

A Yellowstone coyote is medium-sized, like a Border Collie. A wolf, on the other paw, is a giant. Wolves are a foot taller at the shoulder and weigh four times as much as coyotes.

So when a hungry—and naive—coyote sidled up to join wolves at their kill, the wolf pack did what it does best: cut the competition, whether that rival is a wolf from another pack, a fox, a mountain lion, or a coyote. (Wolves rarely eat the competitors they kill.)

Within a few years after wolf reintroduction, Yellowstone’s Lamar Valley coyote population had been reduced by half. Yet today, there are as many coyotes in the valley as there were before wolves returned. That’s an impressive recovery, but I wouldn’t expect less from the coyote, an intelligent, tough survivor with a long history of overcoming adversity inside and outside the park.

When Yellowstone, the world’s first national park, was established in 1872, no one had experience managing a park or protecting its wildlife. Protecting wildlife wasn’t even a high priority. Yellowstone was created to preserve magnificent scenery and magical geothermal features; the animals just happened to live within the new borders. And anyway, there was no money to hire staff to safeguard wildlife. So, for example, miners passing through the Lamar Valley on their way to claims near Cooke City hunted wolves and coyotes for sport or profit.

By the time wildlife protection was considered, park officials were only thinking about protecting bison, elk, deer, bighorn sheep, and antelope from predators. To their minds, protecting wildlife meant killing wolves and coyotes. 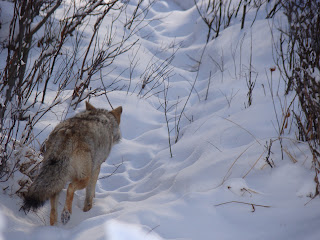 In 1896 coyote control was recommended, and poisoned animal carcasses were the weapon of choice. Eight years later with coyotes still holding their own, the park superintendent said he needed to escalate the war, vowed to use “every means to get rid of them.” Three years after that, the war ratcheted up another notch when the U.S. army, which had been put in charge of the park, deployed troops against coyotes.

This war against predators did not go unnoticed. By the late 1920s, people inside and outside the National Park Service—the group next in charge—were questioning the heavy-handed destruction of wolves and coyotes. Scientific organizations spoke out against predator control, saying these animals helped maintain ecological balance. The view that predators were essential and should be protected became NPS policy in 1936, and the sanctioned killing of wolves and coyotes in Yellowstone stopped.

In the forty years between poisoning the first carcass and firing the last shot, more than 4,300 Yellowstone coyotes were killed. But that did not drive them from Yellowstone. In contrast, it only took seven years to kill 132 wolves and eradicate them from the park.

How could the little coyote survive a battle that the big bad wolf could not?

Coyotes are opportunistic feeders; they’ll eat just about anything that doesn’t move or moves more slowly than they do. In 1937 Adolf Murie and his assistants conducted a landmark study of coyotes in the Lamar Valley. They scoured the valley floor, picked up thousands of pieces of coyote scat and analyzed them. They found that coyotes ate twelve kinds of large mammals; twenty-four different small mammals; twenty types of birds, fish, and snakes; four kinds of bugs; as well as grass, pine nuts, rose seeds, strawberries, mushrooms, blueberries, and Oregon grape. They also found in coyote scat remnants of leather work gloves, twine, cellophane, tinfoil, and shoestrings. 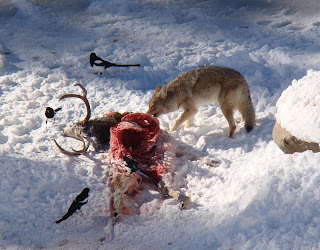 Such a varied diet makes poisoning coyotes more difficult than poisoning wolves, which prefer a single-item menu: elk. Poison the right elk carcass and you could kill an entire wolf pack.

Also, the size of the animal and its pack matters. The small coyote presents a more challenging target to a bounty hunter with a rifle. And when hunted by humans, coyotes decrease the size of their packs; smaller packs are less obvious and harder to track. Wolves, on the other hand, rarely travel alone and always live in packs; the larger the better, from the wolf’s point of view. And from the view of a hunter who is paid by the pelt.

Perhaps most important, unlike wolves, coyote reproduction is “density dependent.” If hunters and trappers kill many coyotes in a particular area, the surviving coyotes will produce more young than usual. According to one study, a coyote population can withstand an annual loss of seventy percent and still generate enough young to replace that loss.

These differences between the two animals are why predator control led to an increase in Yellowstone’s coyote population and the eradication of wolves. The story was the same beyond the park’s boundaries where hunters and trappers—paid with government funds—destroyed the predators.

Among those paid hunters was a predator control agent in New Mexico in the early 1920s named Aldo Leopold. He was good at his job and helped cut that state’s wolf population from 300 to 30 in just three years. When he saw the light about killing predators, it came as a fading green fire in the eyes of a wolf he had just shot. He wrote an essay about that experience and it was published in a book in 1949, shortly after his death. That book, A Sand County Almanac, would become one of the most significant environmental books of the 20th century.

Leopold’s new ideas—including his 1944 recommendation to bring wolves back to Yellowstone—would lead to the development of environmental ethics and wilderness conservation. But that would take decades. Meanwhile, the killing of predators continued.

By the 1970s, the range of the wolf, which had once covered over two-thirds of the United States, had shrunk to include just Alaska, northern Michigan, northern Wisconsin, and northern Minnesota. 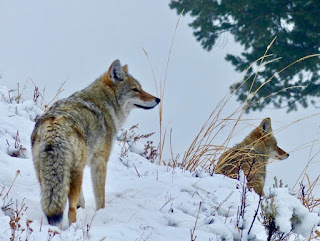 Coyotes—those tough little survivors—fared better than wolves in the predator war outside Yellowstone just as they had in the park, despite federal, state, and private hunters resorting to a gruesome arsenal. Hunters used snares, steel traps, and long-range rifles. They engaged in chemical warfare: anti-fertility chemicals, cyanide, sugar-coated strychnine, and other poisons. They used biological warfare: introducing mange so that coyotes would lose fur and die during winter. They flooded dens or set them on fire. They hunted from airplanes and snowmobiles.

All of this against a critter the size of a Border Collie.

And when the dust settled, coyotes, which before the onslaught had been concentrated in the Great Plains, now lived in every state except Hawaii. They have even taken up residence in large cities like Chicago, Washington, D.C., and Los Angeles, where packs have learned to avoid humans by hunting at night and not howling.

Yep, you just can’t keep a good coyote down.

(This post based on a chapter from the best-selling In the Temple of Wolves.)

All photos by Rick Lamplugh

Posted by Rick Lamplugh at 5:04 PM