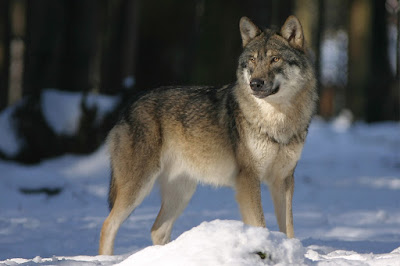 Two recent events have led me to reexamine Wyoming’s approach to managing wolves. First, Wyoming’s wolf hunting season began. Second, a battle has erupted over reintroducing wolves into Colorado. The more I dig into these two events, the more I see how they are related and how Wyoming’s wolf management plan amounts to creating a wolf prison.

This prison is in the northwest corner of Wyoming on the public lands that surround Yellowstone and Grand Teton National Parks. Wyoming calls this prison its Wolf Trophy Game Management Area (WTGMA). Hunters need a license and there are limits to how many wolves can be taken.

A recent Wyoming Game & Fish Department map of the the prison reveals that almost every one of the state’s 50 or so wolf packs roam within the WTGMA most or all of the time. Only three survive outside. The 2019 hunt in the WTGMA started September 1 and runs until December 31. Last year, hunters killed 43 trophy wolves in the prison. 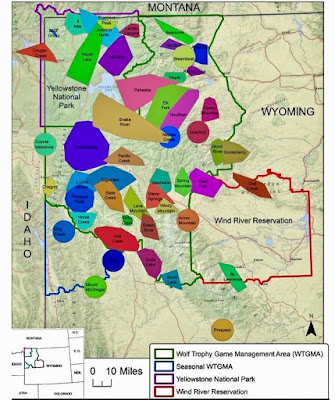 But wolves are not made to be imprisoned; dispersal is a fact of wolf life. A wolf leaves its pack in search of food, territory, or a mate. But escaping this prison is punishable by death. When a wolf leaves that small portion of Wyoming where it can be hunted four months of the year, it enter the 85% of the state where it can be shot on sight, anytime, anywhere, by anyone. No license needed. Wyoming calls this area surrounding the prison its Predator Zone.

Of course, a wolf can’t see prison walls designated by lines on a map when it leaves for its own reasons. Consider a wolf who busts out and heads south in search of elk, a favorite meal. Plenty of elk can be found between the Wind River Reservation and the Colorado border, according to three web sites oriented to elk hunters. So the escaped wolf may take an elk right away or continue south. In less than 200 miles, the escapee—if not shot on sight anytime, anywhere, by anyone—could reach northwestern Colorado, which has abundant elk and is where all of that state’s last five confirmed wolf sightings have occurred. 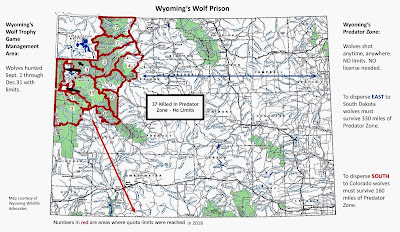 But with the way Wyoming has set up the prison, an escapee’s chances of reaching Colorado are very slim. Last year 37 wolves were reported killed in the Predator Zone, according to Wyoming Wildlife Advocates. That’s just the number reported. I wouldn’t be surprised if others were shot and not reported. They are, after all, considered vermin in the Predator Zone.

Just this year, a collared male from Yellowstone’s Snake River pack was confirmed as escaping the prison, surviving the Predator Zone, and reaching northwestern Colorado. His feat may be even more miraculous than Oregon’s famous OR-7 traveling from northeastern Oregon to northern California. While on his journey, OR-7 was almost always protected by the Endangered Species Act. This escapee from Wyoming’s wolf prison had no protection in the Predator Zone.

Wolves were reintroduced into Yellowstone and central Idaho more than twenty years ago. Since then those wolves and their descendants have dispersed to Oregon, Washington, and California and established permanent wolf populations. But in that same period of time, wolves have not established a home in Colorado.

Posted by Rick Lamplugh at 4:43 PM