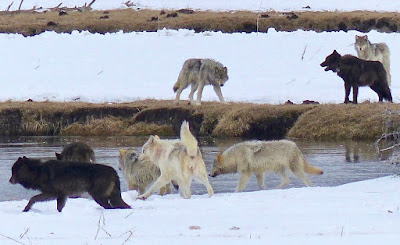 As the US Fish and Wildlife Service and Congress slink around Washington conniving ways to claim wolf populations have recovered and wolves should be removed from the Endangered Species List, I sit in Gardiner, Montana, at the north entrance of Yellowstone, wondering what “recovered” really means.

During the last eight years I’ve lived in or next door to Yellowstone’s wolf country. I’ve watched lots of wolves, talked with lots of experts, heard lots of opinions. I’ve even written a best-selling book about wolves. The recovery of America’s wolf population matters to me.

About 6,400 gray wolves survive in the lower 48 now. Is that a lot of wolves—has the population recovered? To answer that question, I hunted for historical records of gray wolf numbers.

A map in “Yellowstone Resources and Issues Handbook” shows that gray wolves once roamed all but seven of the lower 48 states. Today’s range is almost the opposite: gray wolves are in only nine states: Oregon, Washington, California, Minnesota, Michigan, Wisconsin, Idaho, Wyoming, and Montana. In all, wolves cover about 10% of their historic range in the Lower 48. That doesn’t sound recovered to me.

But it does to the Fish and Wildlife Service. They actually want to delist gray wolves nationwide. The Center for Biological Diversity has sued to stop such delisting. The Center wants a national wolf recovery plan instead of national delisting. Such a plan would enable wolves to establish viable populations in areas with small, recovering populations, including California, Oregon, and Washington. The plan would also promote recovery in areas like the southern Rockies, Dakotas, and Adirondacks, which have suitable wolf habitat but no wolf populations.

If wolves haven’t recovered their range, have they recovered their numbers? In an article in the March 2011 “Yellowstone Science” historians Lee Whittlesey and Paul Schullery report the results of analyzing hundreds of historical records. They found that naturalist Ernest Thompson Seton estimated about two million wolves roamed North America and northern Mexico before the arrival of Europeans. They uncovered a record of scientists that used DNA testing to estimate that 380,000 wolves lived in the western US and Mexico prior to their eradication in the early 1900s. Today only about 2,200 gray wolves survive in the American West. Surely, that’s not recovered.

The picture isn't much prettier in Yellowstone, a place famous for wolves. Whittlesey and Schullery looked at the historical wolf population in and around the park and determined that wolves were once "widespread and abundant." Today about 100 wolves are protected in Yellowstone—and liable to be shot legally when they step paw outside the park. Or illegally while within the park as the Canyon alpha female was.

The historians also found records that in the 1860s several hundred thousand wolves roamed the region that would become Montana. Today, about 900 wolves manage to avoid Montana’s abundant traps and guns. Recovered?

Whittlesey and Schullery quote those DNA scientists as recommending an even more ambitious restoration effort in the West, an effort that “…would restore wolves to past population sizes and enable them to significantly influence the dynamics of the Rocky Mountain ecosystem.”

Scientists have shown that the presence of wolves helps the ecosystems where they are allowed to survive. Given continued protection they would help improve even more ecosystems. I think that more restoration—more protection—sounds like a good goal. Much better than delisting and the inevitable slaughter of wolves that will surely follow.

Rick Lamplugh writes to protect wildlife and preserve wild lands. His bestselling In the Temple of Wolves and the award-winning sequel, Deep into Yellowstone, are available signed from Rick or unsigned on Amazon in paper, eBook, or audio book formats. 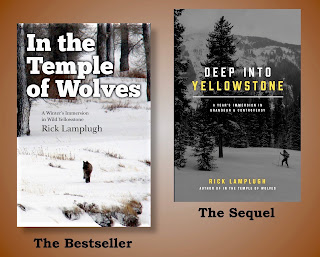