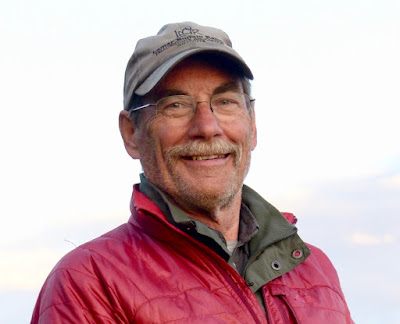 I write, photograph, and speak to protect wildlife and preserve wild lands. And I have wolves to thank for leading me here. The path that I followed appeared one winter eight years ago. That was the first of three winters that my wife Mary and I volunteered and lived at the Lamar Buffalo Ranch in the heart of Yellowstone’s wolf country. Part of our job was helping seminar participants spot wildlife. Since wolves topped the list of animals to see, I watched wolves almost every day.

I learned to identify specific wolves and discovered with amazement the distinct personalities of some. I observed wolves interacting within their pack, and I watched rival packs battle over food, mates, or territory. I realized how wolves changed the behavior of elk. And I listened to many experts describe in depth what we saw each day.

Some evenings I’d go to our cabin exhausted from a day of wolf watching. I would journal about what I had seen or heard, felt or wondered. As the winters added up, I found myself wanting to learn even more about wolves. I read books and journal articles. I interviewed experts. Eventually those early journal entries and later research came together in a book, In the Temple of Wolves: A Winter’s Immersion in Wild Yellowstone.

As that book became an Amazon best seller, I realized that I owed wolves a debt. If I was going to profit from a book about them, I needed to pay them back. One way I could do that was to speak for wolves, to advocate for them. I waded in.

Over the last eight years, I’ve written articles and used social media to advocate. I’ve produced slideshows and podcasts. I’ve spoken to individuals and groups. I’ve talked with legislators at our state capital and in Washington D.C. I’ve written another book entitled Deep into Yellowstone: A Year’s Immersion in Grandeur and Controversy. All to protect wildlife and preserve wild lands.

And I have the wolves in Yellowstone’s Lamar Valley to thank for starting me down this challenging and satisfying path as an advocate.

As a new year and another Yellowstone winter unfolds, I want to reaffirm my commitment to another year of advocating for wildlife and wild lands.

And if you’re an advocate, I would love to read a comment or a private message as to how you started down your path.

Posted by Rick Lamplugh at 8:25 AM