How Wolves and Humans Are Alike 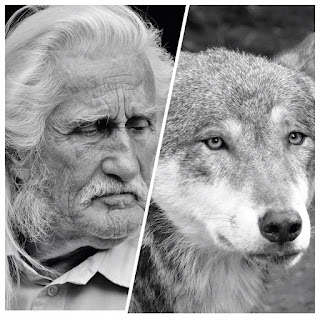 While some people see wolves as vicious killers to be feared, hated and eradicated, I see them as essential predators that we have much in common with. We have similar family structures, preferred habitats, diets, personalities, feelings, and codes of conduct.

[Note from Rick: Each year around this time I post this essay. The idea that we have much in common with wolves is important and helps keep me going as a wolf advocate. I want to share it with as many people as possible--whether they are reading it for the first time or rereading it.]

Wolves once roamed almost all of the Northern Hemisphere. Wolves can live most everywhere we do: forests, prairies, tundra, mountains, deserts, and swamps. They can thrive even in areas crowded with humans such as Europe and Asia.

As humans did, wolves evolved in families, found strength in numbers. Members of any healthy family—human or wolf—assume specific roles. Like human parents, the alpha pair makes decisions and controls the pack. Other members contribute to the pack’s survival. In their families, wolves play, show affection, feed and discipline their young, and mourn their dead.

Wolves and humans both prey on large mammals living near them. In fact, we prefer the same meats. That mutual love for the taste of sheep, cattle, deer, and elk leads to most wolf-human conflict. If necessary, though, both wolves and humans can fast for a long time.

Wolves and humans can both travel long distances in a day. We are both territorial. Wolves howl and scent mark to claim territory. We string barbed wire and draw lines on maps. Wolves and humans fight to keep or take territory. Wolves killing wolves—often in turf wars—is the most common natural cause of wolf death. In a similar way, humans annihilate each other in wars.

Wolves communicate using their voices and their bodies, Their postures and facial displays express joy and sadness, aggression and fear, dominance and submission. In humans we call this non-verbal communication. Wolves have different personalities; some are loners, some are lovers, some are leaders.

Wolves, as well as coyotes, red foxes, and domestic dogs, experience emotions such as joy and grief. In his book, The Emotional Lives of Animals, evolutionary biologist Marc Bekoff writes that while animals may experience emotions that humans can't understand, we can understand many of their feelings. Observing is the key. Bekoff has observed, for example, that wolves "have more varied facial expressions, and that they use these expressions to communicate their emotional states to others. Wolf tails are more expressive, and wolves use more tail positions than do dogs or coyotes to express their emotions."

He describes how such body language revealed the grief a pack of wolves felt after losing a low-ranking female. The grieving animals lost their spirit and playfulness. They no longer howled as a group, but rather sang alone in a slow mournful cry. They held their heads and tails low and walked softly and slowly when they came upon the place where a mountain lion had killed their pack mate.

If wolves and coyotes experience many of the emotions that humans feel, can they also become mentally impaired? Bekoff asks this intriguing question and then concludes that since many psychological disorders have been diagnosed in dogs, "there's no reason why this couldn't be true for their wild relatives."

Wolves and coyotes also share another similarity with humans: both animals are moral creatures. Not long ago most scientists believed that animals lacked a moral compass. But times and attitudes change. When Bekoff and bioethicist Jessica Pierce wrote their book Wild Justice: The Moral Lives of Animals seven years ago, they reported that the “staggering amount of information that we have about animal intelligence and animal emotions” now leads more scientists to say that animals can act with compassion, altruism, forgiveness, trust, and empathy. “In humans,” say the authors, “these behaviors form the core of what we call morality.”

I don’t always associate the words compassion and empathy with wolves and coyotes. Sometimes when I observe these two essential predators, I see a Darwinian dog-eat-dog world: an alpha puts an upstart in its place, two packs battle over territory, a coyote dies trying to share in a wolf pack’s feast.

But wolves and coyotes live in tight social groups—in families—built on a network of relationships that depends on trust, reciprocity, and flexibility, just as human relationships do. Animals in such groups, say Bekoff and Pierce, live according to a code of conduct that prohibits some behaviors and encourages others.

One such code—fairness—is exemplified when coyotes play. “Highly aggressive coyote pups,” say the authors, “will bend over backwards to maintain the play mood with their fellows, and when they don’t do this they are ignored and ostracized.” Rules like this foster cooperation and coexistence.

The ability to get along, in fact, may determine the ultimate size of a wolf pack. For a long time scientists thought that available food regulated pack size. But Bekoff and Pierce point to research by wolf expert David Mech that shows pack size may be regulated by social factors and not just food. My interpretation of Mech’s findings: pack size is governed by the number of wolves in the pack that can bond versus the number of wolves viewed as competition. When those numbers are out of balance—not enough bonders, too many competitors—packs splinter.

Four years ago, philosopher Mark Rowlands wrote Can Animals Be Moral? He believes that many animals—including rats, chimpanzees, and dogs—feel emotions such as love, grief, outrage, and empathy. When acting on those emotions, animals choose to be good or bad. He presents examples suggesting that animals know right from wrong. Though humans possess a more developed moral consciousness, Rowlands says that animals can act for reasons that require an awareness of and concern for others. They can act morally.

Also four years ago, a group of prominent scientists signed the Cambridge Declaration on Consciousness. The scientists declared that rapidly evolving scientific evidence shows that many animals are conscious and aware in the same way humans are. And that animals act with intention. Consciousness, awareness, and intention are keystones of morality.

If we believe that animals can be moral beings, can experience emotions such as joy and grief, and can become mentally impaired, then we must make sure that our actions match our beliefs. We must, as Bekoff writes, treat other beings with respect, appreciation, compassion, and love. “There's no doubt whatsoever that, when it comes to what we can and cannot do to other animals, it's their emotions that should inform our actions on their behalf, and we can always do more for them.”

Yes, we can always do more for wolves. And we should do less to them. We are far too similar to wolves to fear and hate and kill them.