The Good, Bad, and Ugly of Managing Yellowstone's Bison 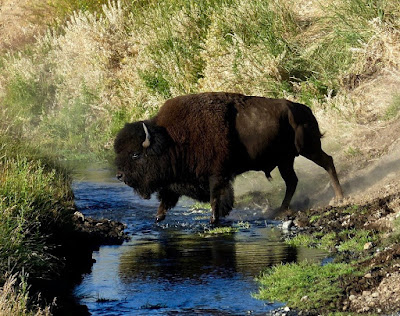 THE GOOD: Yellowstone National Park has finally been allowed to transfer bison to the Assiniboine and Sioux Tribes of the Fort Peck Indian Reservation in northeastern Montana. The 55 male bison were captured in the park in March 2018, spent 17 months quarantined in Yellowstone, and endured two phases of brucellosis testing. They will be quarantined and tested yet again at Fort Peck before they can roam public lands or transfer to other Tribes.

“Yellowstone buffalo are important to Tribes because they are the genetically-pure descendants of the buffalo our ancestors lived with,” said Tribal Chairman Floyd Azure, in a press release. “The return of the buffalo is a return of our culture. Fort Peck is committed to expanding quarantine and sharing these animals with other Tribes across the country.”

THE BAD: The state of Montana has no tolerance for bison outside Yellowstone. To appease the livestock industry, legislators passed a law making it illegal to move wild bison exposed to brucellosis anywhere except to Montana slaughter houses and research facilities. Thus Yellowstone’s controversial quarantine program is necessary to get brucellosis-free bison out of the park and to the Tribes.

Every one of those organizations is responsible for IBMP meeting its goals of confining bison within Yellowstone and reducing the park’s population from 5,000 to 3,000 bison.

To meet the goals, the IBMP arranges each winter to remove hundreds of bison. Many are killed just outside the park in a three-month hunting season. More are captured at Yellowstone’s Stephens Creek facility. A few are kept in quarantine so they can eventually be shipped alive to Tribes—as the 55 were. But the majority will be hauled by Tribal members to slaughter houses. The Tribes then share the meat and hides. The capture and slaughter lasts a month or more. All told, the lives of Yellowstone bison are at risk for at least four months each year.

Since 1985 more than 11,500 of Yellowstone’s genetically pure bison have been killed by hunting or slaughter, according to Buffalo Field Campaign.

THE UGLY: Managing Yellowstone’s bison—our national mammal—with confinement and death is done in the name of protecting cattle from brucellosis. But is that really necessary?

Brucellosis can be transmitted from elk or bison to cattle and cause infected livestock to abort calves and ranchers to lose money. But there has never been a documented case of brucellosis transfer from bison to cattle in the wild. Ironically, the transfer originally went in the other direction: cattle transferred brucellosis to bison in the early days of the park when cattle were kept in Yellowstone to provide milk and meat for visitors.

Elk, on the other hand, have transmitted brucellosis to cattle numerous times—with no harm to Montana’s profitable livestock industry. Elk are not confined to the park, are not captured and slaughtered like bison. Elk are not viewed as livestock, are not under the control of the Montana Department of Livestock as bison are once they leave the park. Elk are seen as wildlife, as trophies, to be hunted and mounted. Bison are used as brucellosis scapegoats to be confined and killed.

Posted by Rick Lamplugh at 4:07 PM