The Beauty of Yellowstone's Bison Rut 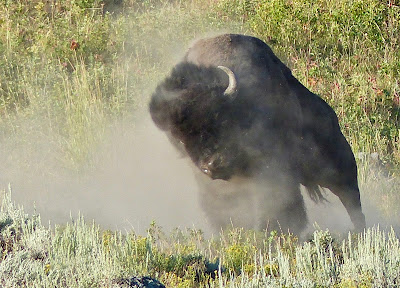 This male, arising from a wallow in dust and dirt, intends to convey to other males his strength and energy as he prepares for the rut—the annual and ancient breeding ritual. While males are capable of breeding when two or three years old, they usually don’t win the right to breed until they are six to eight  and bigger, stronger, and wiser.

Females, on the other hoof, can breed when they are as young as two or three. By mid-July and through mid-August thousands of soon-to-be ready females congregate in Yellowstone’s Lamar Valley. A patient observer can watch many males arrive by ones and twos from all points of the compass, compelled here by a primeval drive to reproduce.

The arriving males will battle to see who gets to mate. To win that battle, this dusty male will have to prove his dominance. He may have already done so with a few males if he lived with them in a male-only group prior to arriving here. That could eliminate a few battles. But there are plenty of other males ready to challenge him. That challenge can take on several forms.

Some males grunt, bellow, and roar to claim females and deter other suitors. Two males may decide who is tops by walking along side each other in a “parallel walk.” Or they may have a head-to-head shoving match.

But if posturing, walking, and shoving don’t deter a competitor, it’s time to rumble. The two contestants will dodge and feint and butt heads and shove each other with their powerful legs. An experienced battler may slam a contender in the side with his massive head and sharp horns.

At some point, one of the fighters will call it quits. Both loser and winner can sustain injuries. A male gored in the abdomen may die a slow death due to infection.

One study, mentioned by Harold Picton in his book, Buffalo: Natural History and Conservation, found that 50 percent of males inspected showed fractured ribs that probably occurred during rut battles.

Whatever the cost of proving his dominance, the victor will stay by the side of the female he has claimed until she is ready to mate. He needs to guard her for a couple of reasons. First, staying close allows him to keep her apart from the main herd and to threaten approaching males. And second, females, write White, Wallen, and Hallac in Yellowstone Bison, are receptive to breeding for only one or two days. When she’s ready, he better be there.

Once he mates with her, he may move on and try to win the right to mate with another female, according to Yellowstone Resources and Issues.

In the end though, the decision to breed is not just the male’s. As a female nears the time when she’s receptive to breeding, she may elude the male that battled to breed with her. She may run through the herd and attract other males. She may approach a larger, more dominant male and allow him to breed with her. In this way, writes Jim Bailey in American Plains Bison: Rewilding an Icon, “Genes of bigger, stronger, more alert, more agile, more energy efficient and disease resistant bulls are passed along.”

Once all those genes have been passed on and the rut concludes, the males will go off to spend winter alone or with a few other males. The females will merge back into much smaller groups, each led by a matriarch. The pregnant females will carry their calves through the ravages of winter. Then after nine to nine-and-a-half months, the babies will arrive, once again heralding spring and proving that life goes on.

A couple months later this big guy or many like him will be dusting up and getting ready for the rut to begin again.