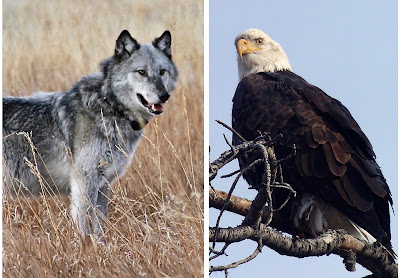 In March of this year, when announcing the planned delisting of wolves in the lower 48 from Endangered Species Act protection, the US Fish and Wildlife Service stated, “The gray wolf joins the bald eagle…and 33 other species of animals and plants in U.S. states, territories and waters that have been brought back from the brink with the help of the ESA.” Comparing the incomplete recovery and limited protection of the wolf with the greater recovery and ongoing protection of the bald eagle is either a careless mistake or deliberately misleading.

The Killing of Bald Eagles
Our country may have had as many as 100,000 nesting bald eagles in 1782 when we adopted the bird as our national symbol.

But, not everyone was a fan. Shortly after the bald eagle became our national symbol, Benjamin Franklin wrote, ”For my own part I wish the Bald Eagle had not been chosen the Representative of our Country. He is a Bird of bad moral Character. He does not get his Living honestly.”

Franklin wasn’t alone. Many other Americans falsely accused the bird of preying regularly on chickens, lambs, and domestic livestock. Bald eagles were labeled a threat and the killing began, even though bald eagles mainly eat fish and carrion. This killing coupled with a loss of nesting habitat led to a decline in their numbers. By the early 1900s, bald eagles were flying toward extinction in the lower 48.

The Killing of Wolves
Wolves were once more abundant in the lower 48 than bald eagles. Some historians reckon that one to two million wolves roamed North America when colonists first arrived. Researchers estimate that gray wolves once inhabited 41 of the lower 48 states.

Colonists arriving from Europe brought wolf hatred with them and gave it a deadly American twist. Historian Jon T. Coleman found that colonists created wolf fantasies that were the opposite of reality. They pictured wolves preying on humans, but actually humans preyed on wolves. They described wolves surrounding humans, inducing panic with hideous howls. In reality, humans surrounded and panicked wolves. This savage wolf that only existed in minds fed with lies and fantasies prompted vicious treatment of real wolves—treatment far worse than that which bald eagles suffered.

Those lies and fantasies went on to be institutionalized in the early 1900s by the US Biological Survey—the first government wolf-killers—in order to generate funding for predator-eradication. They and their prodigy, Wildlife Services, almost cleared the lower 48 of wolves. By the time wolves were protected under the 1973 ESA, only 500 or so survived in remote northeastern Minnesota along with about 40 on Michigan’s Isle Royale.

The Protecting of Bald Eagles
The bald eagle first gained federal protection in 1940 under what later became the Bald and Golden Eagle Protection Act. The bird later acquired additional protection under the Migratory Bird Treaty Act. With ample protection, populations stabilized or increased.

But bald eagles soon faced another threat: the widespread use of the pesticide DDT after World War II. DDT accumulated in bald eagles and caused them to lay eggs with weakened shells. As damaged eggs failed to hatch, their population plummeted.

Concern for the bald eagle resulted in its protection in 1967 under the predecessor to today’s Endangered Species Act. A few years later, the eagle became one of the original species protected by the ESA.

With ESA protection and a ban by the Environmental Protection Agency on the general use of DDT, bald eagle populations rebounded and the bird was officially delisted from the ESA in 2007.

However, and this is a big however, bald eagles continue to be protected by the Bald and Golden Eagle Protection Act and the Migratory Bird Treaty Act. Both federal laws prohibit molesting, disturbing, selling, or killing eagles or harming their nests or eggs.

In 2011, wolves in Montana and Idaho, the eastern third of Washington and Oregon, and a small part of Utah lost endangered species protection via a congressional rider attached by Rep. Mike Simpson (R-Idaho) and Sen. Jon Tester (D-Mont) to a must-pass budget bill. Now delisted in Wyoming too, wolves are regularly killed in all of these states.

Compared to Bald Eagles, Wolves Are NOT Recovered or Protected
The USFWS once monitored the number of bald eagle breeding pairs in the lower 48. Their records show a steady increase from 487 in 1963 to 9,789 breeding pairs in 2006, the year before the delisting from the ESA. Simple math shows that number of breeding pairs represents a minimum population of at least 20,000 bald eagles at time of delisting.

Unlike that accurate monitoring of bald eagle numbers, the USFWS estimates that the “recovered” gray wolf population is now “more than 6,000” in the lower 48. That’s less than one-third the size of the bald eagle population at the time the bird was delisted.

According to the USFWS, at the time of delisting from the ESA, bald eagles could be found in every one of the lower 48 states and the District of Columbia.

In March of this year, the USFWS wrote that the wolf is recovered and “roams free in nine states.” This is just a fraction of the 48 states the bald eagle could be found in when delisted or the 41 states wolves roamed in when colonists arrived.

Worse yet, if delisted from the ESA, there is no backup federal legislation for wolves as there is with bald eagles, which are still protected under two federal laws. With No ESA protection, hated and misunderstood wolves will certainly be disturbed, molested, and killed throughout the lower 48, minimizing their “recovery” even further.


You Can Help Keep Wolves Protected
The USFWS has extended the deadline for comments on their proposed nationwide delisting of gray wolves. You have until midnight on July 15 and can comment here. Thanks for taking the time to write an effective comment!

To read PART 1 and about how to write an effective comment.
To read PART 2: Dispersing Wolves Need ESA Protection

Collage photo of wolf CCO public domain via Pixabay
Posted by Rick Lamplugh at 6:23 AM