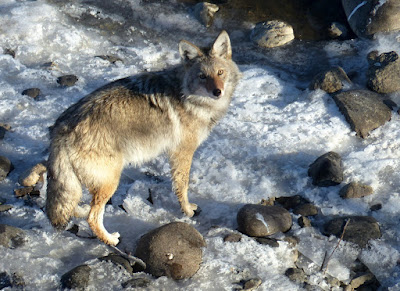 My wife Mary and I volunteered and lived for three winters at the Lamar Buffalo Ranch in the heart of Yellowstone's wolf country. We drove 14-passenger buses, carrying excited seminar participants over the Lamar Valley’s snow-covered roads in search of wildlife. Wolves top the list of animals visitors want to see in winter, and seminar instructors work hard to spot them. Coyotes definitely take second billing.

But truth be told—I like coyotes as much as I like wolves. And two special days at the ranch one winter gave me the chance to observe coyotes in the wild and understand just why I like them so.

Just before dark, Mary and I slipped out of the bunkhouse kitchen and onto the back porch. Earlier in the day, one of the instructors had stopped by to tell us he had spotted a bison calf lying in the snow, and it didn’t look well. The calf was across the road from the ranch, close enough that we should be able to see it with our naked eyes and zero in with a spotting scope.

I set up a scope, located the calf, and zoomed in on blood that dotted the snow near its head, as if sprayed by a cough or sneeze. The instructor didn’t know what had happened to the animal, and I wondered if it had internal injuries after being hit by a visitor’s car. The calf was so still that it looked dead, until the head rose a couple of inches and then flopped back onto the snow.

I saw no predators or scavengers, but when I scanned to the west, I discovered a clever coyote mingling with a bison herd about a quarter mile away. Its head was down and its ears were twitching as it listened for mice or voles scurrying beneath the snow after being disturbed by grazing bison.

During lunch the next day, I returned to the back porch. I had camp duty that day and the next, cleaning instead of driving. I had time to watch the calf and see what happened. Though I knew this could be gruesome, observing would help me better understand the Lamar Valley’s food web—who eats whom. And understanding the valley is one reason I came to the ranch. 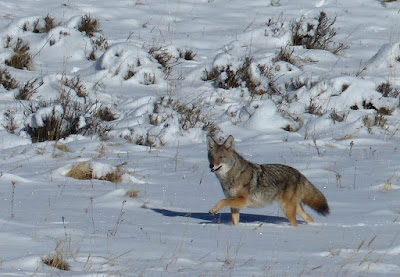 I peered into the scope. The calf was so flat it looked boneless. A coyote, attentive, cautious, and from its size a male, stood about a yard from the hindquarters. He snuck forward, sniffing, tail down. The calf twitched; the coyote jumped back. A moment later he inched closer, poked the calf with his front paw. The calf shuddered; the coyote leapt. This dance continued; the three-hundred-pound calf struggling to maintain its life, the daring thirty-pound coyote working to sustain his.

The coyote moved in and ducked his head out of my view and into the tender—and vulnerable—underbelly near the calf’s rear legs. When he came back into view, he had a mouth full of fur. I gasped. He dove back in and reappeared with more fur. I thought to myself: Eventually he’s going to come up with hide and blood. Do I want to watch anymore? I pulled my head away from the scope.

Coyotes are powerful and persistent

I studied the porch floor and thought about my desire to understand the food web. I returned to the scope. The coyote stood atop the calf and looked like a dog with a pull toy: head low, canine teeth hooked into hide, front and rear legs stretched forward, back arched. While pulling, he repeatedly and violently twisted his head from side to side. Even through the scope I felt his power. The calf wriggled but could not escape.

The persistent coyote was trying to eat the calf while it was still alive. That made sense; once the animal died, the meat would freeze. This meal would never be warmer or softer. But understanding the efficiency didn’t make it any easier to watch.

The calf raised its head and looked at the predator. The coyote did not move away; he just glanced toward the calf’s eyes and then back at where he would bite next. The calf’s head fell back to the snow, and a large cloud of breath, perhaps its last, rose into the cold air, soft and white against the dark fur. I released a long, sad sigh. 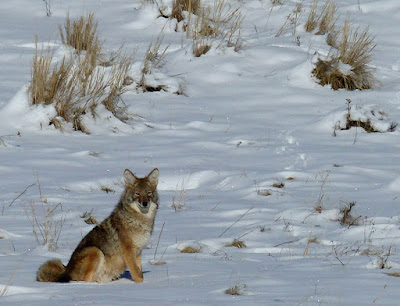 The coyote turned, looked toward the eager photographers that had gathered along the roadside, and circled his meal. He stared into the calf’s eyes and then sauntered to the rump. He poked the animal; it didn’t move. He pushed his muzzle against the calf. Still no movement. He yawned. A realist, he knew the animal was dead and there was no danger here, just a fine feast. There was no competition in sight, the sun was out, and the day relatively warm—about twenty-five degrees. The coyote curled up in the snow.

A few hours later I returned to the scope and watched as a raven flew off, meat dangling from its beak. That single coyote—after his nap—must have opened the carcass, ate his fill, and left.

I watched as two other coyotes approached. I recognized them: a big male and a smaller female, her tail ratty from mange. A mated pair, they had claimed this part of the valley as their territory. They stopped and nestled in the snow some distance from the carcass. They watched the photographers and showed no sign of moving in on the meal.

As the pair lay in the snow, I heard coyotes yelping from Ranger Hill, just beside the bunkhouse. I zoomed the scope in on the mated pair and waited for their reaction. They threw their heads back; their breath escaped without sound. Two seconds later their howls reached me. The Ranger Hill coyotes replied. I was in the middle of a call and response. I smiled and applauded softly.

Coyotes are tidy and loving

A few hours later, Mary joined me on the back porch and set up her scope. I looked into mine and focused on the male of the mated pair. He was eating and bloodied to his ears. 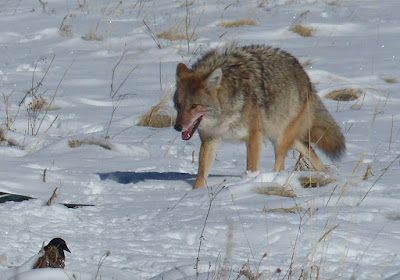 He stopped, walked away, bowed down, and wiped either side of his face in the snow, painting red swaths. He finished his after-dinner ablutions by driving his muzzle into snow up to his eyes. Then he rejoined his ratty-tailed mate.


After some sniffing and snuggling, the pair returned to the carcass and alternated short bursts of eating and glancing around the area, ever watchful of potential danger.

Coyotes are territorial, not bloodthirsty

A few moments later, the Ranger Hill Coyotes yelped again. I couldn’t see the yelpers but could distinguish several voices. Mary and I held our breath as two indistinct shapes moved down Ranger Hill in the direction of the bunkhouse.

“I’ll bet those are the coyotes we heard yelping a minute ago,” I said.

“Whoa! Look at that. Raised leg urination!” Mary exclaimed. Both newcomers from Ranger Hill had raised a leg, urinated, and kicked snow on it. Only alphas—male and female—raise their legs to urinate; other pack members squat. This alpha pair was marking territory already claimed by the mated pair dining across the road. Trouble brewing! 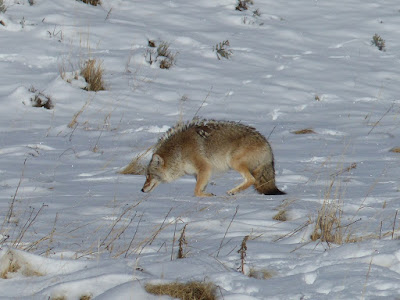 The Ranger Hill coyotes crossed the road and began loping toward the carcass. When they reached the mated pair, they slowed down, lowered their heads, bared their canines, tucked their tails between their legs, and arched their backs.

Meanwhile, back at the carcass, the ratty-tailed female of the mated pair had strolled ten yards away and was nonchalantly washing her face, having peacefully granted the carcass to the second Ranger Hill coyote. With no serious harm to each other, the four coyotes had decided who would eat next.

Some wildlife biologists believe that because the Lamar Valley is so small the animals that live there may know one another. If that's true, perhaps the Ranger Hill coyotes knew that the male of the mated pair wouldn’t leave without a squabble. And that his mate was not real competition and could be allowed to stroll.

After the Ranger Hill coyote quit the chase, he trotted back to the carcass, head high. He joined his partner in their prize. The vanquished male sat far away, cleaning himself.

I moved the scope around and looked at the coyotes. All four looked healthy. That fit what a veteran wolf watcher had told me: Since Yellowstone’s wolf reintroduction in 1995, only smart and strong coyotes have survived.

Coyotes are worth protecting

Time spent living in coyote country taught me that these wild animals have qualities that would benefit any human. Coyotes are clever, daring, persistent, realistic, communicative, loving, intelligent, and survivors. Coyotes deserve our respect and protection.

This post based on a chapter from In the Temple of Wolves.

My bestselling In the Temple of Wolves; its sequel, Deep into Yellowstone; and its prequel, The Wilds of Aging are available signed. My books are also available unsigned or as eBook or audiobook on Amazon.

Posted by Rick Lamplugh at 6:00 AM