A Glimpse of Yellowstone Wolf Country 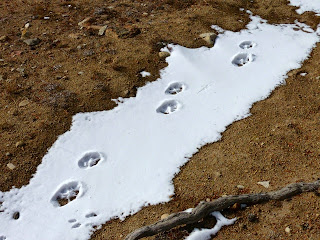 [This post based on a chapter from my new book, Deep into Yellowsone: A Year's Immersion in Grandeur and Controversy.]

Mary and I came upon the first set of wolf tracks within minutes of leaving the trailhead.  In the shallow snow that frosted the trail, the wolf’s prints looked as fresh as ours. They had not been melted by yesterday’s sun or frozen by last night’s chill. We studied, debated, and eventually agreed that the tracks were from a small wolf ambling in the same direction we were heading—toward Swan Lake Flat, four miles farther along this portion of Yellowstone’s Howard Eaton Trail, near Mammoth Hot Springs.

A wolf! Buoyed by this discovery, we laughed and chattered, placed our hands by the tracks and took pictures. Hoping we would be lucky enough to see this—or any—wolf, we followed the tracks for about a half-mile until we reached a stand of naked aspen, their light trunks a pleasing contrast to dark conifers. Across from the aspen, the wolf’s tracks veered off trail and into a draw with a floor so cluttered by debris that following the wolf was beyond our skill level.

We stood in the middle of the trail, silent, until Mary asked in a soft voice, “Do you think the wolf left the trail because it heard us?”

“I wouldn’t doubt it with all the noise we made,” I replied.

“Darn!” Mary said, frowning and looking with longing at the last clear track.

Our disappointment of possibly having disturbed the wolf was replaced with excitement as we continued on and found other tracks. First came those of a coyote heading in our direction. Then elk and deer. Squirrels and deer mice. A fox. Each set of tracks invited us to stop and study and imagine. 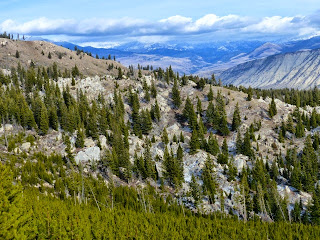 We followed the winding, wildlife highway until a gap in the trees revealed a view that brought us to a halt: the snow-capped Absaroka Mountains, flat-topped Mt. Everts, the dark cut of the Gardner River canyon and the high bridge that spans it, distant Blacktail Deer Plateau, and nearby Bunsen Peak with its steep side scarred by the colorful trail of a slide.


Much of what we were admiring is part of the shared territory of the 8-Mile pack and the Prospect Peak pack. This territory is also our new neighborhood, a place to explore now that we live just outside the park's north entrance. Farther to the east, about twenty-five miles as the raven flies, lies the Lamar Valley, our home for three winters when we lived and volunteered at the Lamar Buffalo Ranch.

For the first two of those winters, the Lamar Valley had been wolf central, exemplified by a magic morning when we stood in the parking lot of the Buffalo Ranch, sandwiched between eight wolves from the Mollie’s pack heading east along the road and eleven wolves from the Lamar Canyon pack heading west along the base of Druid Peak. But by our third winter, the Lamar Canyon pack had been shattered by a hunter’s bullet, the famous alpha female—06—killed outside the park in a legal (but uncalled-for) hunt, her alpha male—755M—off in a fruitless search for a new mate, the rest of her pack dispersed to who knows where. The lack of wolves in the valley that final winter, tainted our time with sadness. 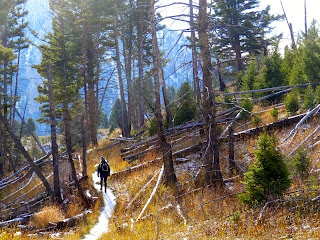 Pulling ourselves away from the viewpoint , we picked up another set of tracks: two wolves traveling together in the same direction as we were. Mary turned to me and whispered, “I think we should follow these tracks in silence. What do you say?”

I stood there and imagined spotting the wolves, wild, free, and in their home. I smiled and whispered, “Great idea. I don’t want to scare these two off.”

Over the next half-mile, we discussed with our hands how the tracks revealed that the wolves sometimes walked beside one another and at other times the rear wolf walked in the tracks of the lead animal. We had often seen wolves do this in the deep snow of January and February in the Lamar Valley, and we had figured it was a matter of efficiency. But this early-November dusting of snow did not demand efficiency. As I walked and wondered, I glanced down and realized that I was stepping in Mary’s boot prints so as to avoid the wolves’ tracks. Was it possible that these wolves were doing the same so that they did not mar the story that their sensitive noses could read along the trail?

After a while, we left the forest and entered the start of a huge slide area. The ridge above and to our right is the edge of an ancient thermal terrace that must have been similar to nearby Mammoth Hot Springs. But, like everything else, Yellowstone’s thermal areas change over time. This one dried up; the travertine aging from white to mottled gray. At some point the terrace collapsed and crashed downhill, scattering chunks in its wake, some the size of small houses. Biding their own slow time, lichen grew, freckling the blocks with orange. Conifers ferreted out places to sprout and grow, die and fall. 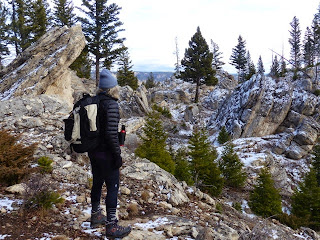 We stopped in the thickest part of the slide zone and studied the area. At the base of some chunks were dark openings. Could one of these be the mouth of a den? Was this where the two wolves, perhaps a mated pair, were heading? Would they den here in a few months? We determined that this slope faced east. And we could not hear or see a water source. This was probably not an optimal site; I have learned that wolves often choose den sites on south-facing slopes and want water nearby. This desire for southern exposure and water in a home site is another of the many ways that wolves and humans are alike.

For reasons known only to them, the wolves we had been following left the trail in the middle of the jumble. Mary and I continued along, making tracks in virgin snow. As we neared the other side of the slide and entered thick forest, we came upon the trail of a single wolf heading toward Swan Lake Flat. His big tracks marched right down the center of the trail. We followed them to a viewpoint. His paws didn’t pause, but we did. Spreading below us was the ancient bottom of a large lake once filled by melting glaciers. Over eons the lake had dried and shrunk, leaving a remnant now called Swan Lake and a lot of flat bottom that sage and grass has claimed. This buffet for elk and bison may explain why the trail we were on is such a wildlife highway. Hungry grazers take the trail to and from the feeding grounds; hungry predators follow.

We left the viewpoint and kept following the big wolf tracks now heading downhill toward the lake. I took the lead, and moments later I heard Mary’s forced whisper, “Rick, stop! Rick, stop! 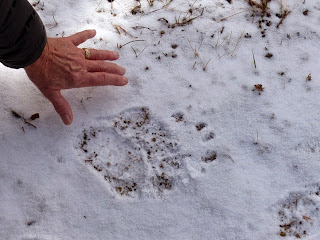 I turned and watched Mary use her entire body to pantomime the lumbering walk of a grizzly. Then she waved for me to come back. When I reached her, she pointed to the snow-covered trail and the track of a grizzly’s rear paw as long as Mary’s size-seven boot. And much wider. We bent over and examined another track, the imprint of the ball, toes, and claws of a wide front paw, my boot print in the snow beside it. I had walked right by these tracks without seeing them! That’s why Mary is the tracker in our pack.

We surveyed our surroundings. The trail, with grizzly and wolf tracks intermingled, threaded through thick forest with limited visibility. We started walking, Mary now in the lead. After a few paces, I said, “We’re behind and downwind of that bear. While we followed the wolf tracks in silence, I’m not sure that's a smart move now.”

Mary looked back over her shoulder and, with the volume rising with each word, said, “Yeah, we don’t want to surprise a grizzly.”

Off to our right we heard the snap of twigs and crackle of dried leaves. We stopped and looked in the direction of the sound, but the understory was too thick to penetrate. Eyes wide, we stared at each other, nodded, and shouted in unison, “Yo, Bear! Just us! Coming through!”

We moved on slowly and loudly, our heads swiveling. We rounded a bend and stopped at a mess of tracks. Reading them, we discerned that the wolf had continued on but the grizzly had stopped, turned around, and come back about ten feet.

“Look at that,” Mary said. “It left the trail and headed in the direction from which we heard that noise. I wonder if it left because it heard us.”

We kept heading downhill toward Swan Lake, following just the big wolf tracks. When those tracks left the trail, the wild slipped from our walk. For me, the presence of wolves and grizzlies defines wildness. Those big predators knock us humans from our self-proclaimed throne. Their presence invites us to use our senses fully, to engage the moment, and to find our true place in nature. 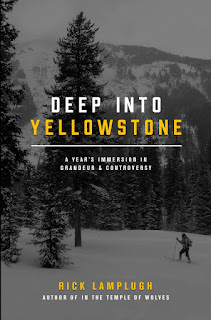 My new book, Deep into Yellowstone: A Year’s Immersion in Grandeur and Controversy, is available signed from Rick, or unsigned on Amazon.

My best seller, In the Temple of Wolves, is available signed, or unsigned on Amazon.

Posted by Rick Lamplugh at 5:00 AM